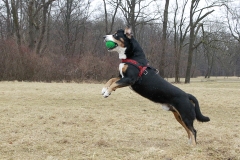 An Entlebucher Sennenhund is catching a ball in the English Garden on March 08, 2012. (Photo credit: Agency-Animal-Picture/Getty Images)

What do dog toys have to do with religious freedom?

In a recent decision concerning a trademark infringement dispute over a dog toy, the United States Court of Appeals for the Ninth Circuit held that the dog toy in question was “an expressive work.” Therefore, it was protected under the First Amendment. Quoting the U.S. Supreme Court decision in Hurley v. Irish-American Gay, Lesbian and Bisexual Group of Boston, Inc., the Ninth Circuit noted that “the Constitution looks beyond written or spoken words as mediums of expression.”

In recent years, various state government officials have taken pains to pursue in court Christian artists and creative professionals who serve everyone, but don’t express every message or celebrate every event. Their decisions to not speak certain messages are never trivial. Rather, they are grounded in deeply held beliefs formed by their faith. Often, these creatives communicate “beyond written or spoken words.”

There’s floral artist Barronelle Stutzman, who could lose her business, savings, and most everything she owns because she politely declined to participate in and create floral art celebrating a friend’s same-sex wedding. The Washington attorney general, who sued Barronelle without even receiving a complaint, even conceded that her floral designs are a form of expression. Her case is pending before the U.S. Supreme Court for the second time.

And there’s a name you may not know: Lorie Smith. Lorie owns a graphic and web design company, 303 Creative. Her goal has always been to honor and glorify God through the work she does. That means she is selective about the projects she takes on because she speaks through her design work.

Like Jack and Barronelle, Lorie serves everyone. But she does not use her talents to promote any conception of marriage other than between one man and one woman.

Colorado would deploy the Colorado Anti-Discrimination Act (CADA)—the same law used to target Jack—to force Lorie to create websites celebrating same-sex weddings. As the brief ADF attorneys filed with the United States Court of Appeals for the 10th Circuit in her case explains: “This attack on Lorie’s faith and editorial freedom targets ‘the fundamental First Amendment rule’—that ‘a speaker has the autonomy to choose the content of [her] own message.’”

Getting back to the original question: What do dog toys have to do with religious freedom? Potentially, a lot.

If dog toys can be expression protected under the First Amendment, shouldn’t custom-designed cakes, floral art, and websites also be protected? Shouldn’t their creators be entitled to choose what they say or represent through their creation? Shouldn’t they be allowed to have their faith inform their expressive decisions—and not be punished for it?

Alliance Defending Freedom believes so. And we will continue to defend the freedom of creative professionals to create freely.

Charles Snow is a direct marketing copywriter and editor at the Alliance Defending Freedom.