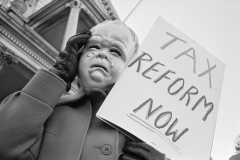 A review of Taxes Have Consequences, by Arthur B. Laffer, Ph.D., Brian Domitrovic, Ph.D., and Jeanne Cairns Sinquefield, Ph.D.

With Republicans having fallen short of their dreams of taking the Senate this year, it’s a sure bet that the usual suspects will soon be clamoring to raise taxes. However, the majority in the House is in a position to stop these economy-killing tax hikes and pass sound policy (i.e. income tax reductions) that have been proven to spur economic growth.

If the defenders of free market economics need evidence to win those debates, they’ll be well-served by Dr. Arthur Laffer’s new book, Taxes Have Consequences: An Income Tax History of the United States. Along with Dr. Brian Domitrovic and Dr. Jeanne Cairns Sinquefield, Dr. Laffer has assembled much more than just an argument here. They have marshaled an army of evidence, from the first days of the constitutional income tax up to the present day.

Everyone on the right in American politics understands the obvious truth that income tax revenues go up when tax rates go down. What’s often missing, though, is the detailed theory as to why that happens, and the evidence demonstrating that it does so.

Laffer and his coauthors offer both. They richly explain why top tax rates don’t get us more revenue – largely but not entirely having to do with the rich’s impressive facility at finding tax shelters – and he unloads a dump truck full of historical evidence from America’s past that this has worked out exactly according to theory when tested.

An excellent story from the book is the tendency of the well-off to put their wealth into municipal bonds when tax rates go up. This, according to Laffer, is because interest on those bonds is not taxed, and it may not even be constitutional to tax it. For example, the authors tell the story of the income tax increases of the late 1910s and early 20s, after which tax receipts fell. When the estate of William Rockefeller filed its tax returns, it revealed that about 85% of his wealth was in municipal bonds, exempt from federal income tax.

This story does not only illustrate the fact that trying to tax the rich more just causes them to move their income away from the tax. It also demonstrates why higher taxes harm the rest of the economy. If that money were invested in productive private enterprises instead of municipal bonds, entrepreneurs would be using it to create jobs and produce wealth. But when the tax rates go up, that productive money gets moved right out of the productive sector of the economy, and parked where the rich won’t pay taxes. As a result, the new wealth won’t be created, and the new workers won’t get hired.

Taxes Have Consequences demonstrates the reliability of this formula so thoroughly, it’s hard to understand why cutting taxes isn’t universally popular with politicians. It almost always gives the government more revenue, and isn’t that what all the politicians want? More of other people’s money to spend?

Alas, it is not universally popular, and American politics continues to offer a target rich environment of people who always want to see tax rates going up, up, up no matter the consequences to our economy. If there are going to be so many targets for rhetorical broadsides, the intrepid debater would be well to go in with plenty of ammunition. Dr. Art Laffer’s and his coauthors’ book gives readers exactly that. Buy Taxes Have Consequences. Read it. And come prepared to win debates about whether cutting taxes is the best thing for Americans at every level of society.