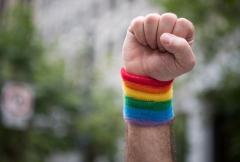 Most Americans don't care whether someone is a heterosexual or a homosexual, but they do care when they are told they must affirm his status. Tolerance is one thing — to tolerate is to "put up with" — and that is what everyone is entitled to. But no one is entitled to require that others ratify their status, and this is particularly true when status affirmation becomes part of a larger agenda.

The ruling class — the elites in government, law, business, education, the media, the arts, and the foundations — is consumed with celebrating gay pride in the month of June.

President Biden has issued "A Proclamation on Lesbian, Gay, Bisexual, Transgender, Queer, And Intersex Pride Month, 2022." He says that "this month, we celebrate generations of LGBTQI+ people who have fought to make the possibilities of our Nation real for every American."

Biden's federal agencies are posting images of the "Progress Pride Flag," giving special attention to men and women who falsely claim that they are of the other sex. The Air Force and Marines are also "recognizing and honoring the contributions of our LGBTQ service members."

Corporations are funding gay pride events in and out of the workplace. Colleges and universities, including Catholic ones that previously had an orthodox reputation, have embraced this agenda. The media are second to none heralding gay pride events.

Unlike racial and ethnic groups which celebrate their contributions to America, the ruling class is raising the flag for those who are celebrating their sexual behavior, not their ascribed status. Conduct, unlike racial and ethnic identities, is normative, meaning that it is subject to moral review. It is therefore open to commendation or condemnation.

No one should be required to affirm someone else's sexual practices, and despite what the ruling class says, that is one of the reasons for holding gay pride events. The source of gay "pride" is what the actors do in bed and with whom, thus making them qualitatively different from racial and ethnic celebratory events. Fixated on their body, not their heritage, makes gays radically different from all other demographic groups. It is a function of their narcissistic tendencies.

Those who think this is being unfair should read what a prominent gay activist and author, Brandan Robertson, has to say about gay pride parades:

"So, yes, people of all shapes, sizes, religions, ethnicities, races, and cultures will be marching through the streets shirtless, and perhaps pantless (hello speedos!) but this has a lot less to do with LGBT+ being hyper-sexual or promiscuous — instead, it's a radical display of liberation and safety, a time to let our bodies and lives be seen as the beautiful displays of creativity and majesty that they are — something, again, that straight people get to see and do every single day."

There is not a single racial or ethnic celebration that can be described this way. It is gays who make their body, and their sexual practices, the primary source of their identification, not others.

The other reason we have these events is to normalize what is intrinsically abnormal, i.e., the notion that the sexes are interchangeable. They manifestly are not. There are but two sexes — man and woman — and the gender roles that are attached to them are universally recognized. They are the same everywhere, historically and worldwide, and that is because they are a reflection of human nature, which is an immutable condition.

In a time when the nation is already divided along many social and cultural lines, we don't need more celebrations of how different we are. The emphasis should be on how much we have in common with our fellow man, while at the same time respecting diversity.

The ruling class, however, is busy seeking to divide us, carving us up into endless segments of society; this began with the multicultural agenda in the schools in the 1980s. Indeed, our elites have become the primary source of intolerance in this country. Resistance to them is long overdue.