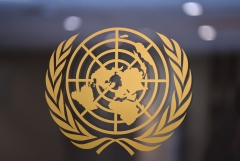 It is no secret that the globalists at the United Nations hate the Catholic Church. Since 1994, the Catholic League has lodged multiple complaints against these Catholic-bashers. This June, the Office of the High Commissioner for Human Rights (OHCHR) has been rather active, targeting the Church twice.

Starting on June 4, so-called experts from OHCHR put out a statement condemning the Church for the mistreatment of indigenous children at residential schools in Canada. But this is not exclusively a Catholic problem. It is most especially a Canadian problem, and these tragedies are not unique to Catholic-run residential schools. Virtually every faith and institution in Canada is culpable. Yet, true to globalist Catholic-bashing form, OHCHR chooses to single out the Church.

Hot on the heels of this attack, on June 21, some of these same savants wasted no time to express further animosity toward the Church. In this instance, they called on the Holy See to act against sexual abuse and provide reparations.

While it is bad enough to paint sexual abuse as a problem that the Church has failed to address, what makes the OHCHR attack even more egregious is that one of the largest offenders of sexual abuse in the world is the U.N.

In December of 2019, a report was issued condemning U.N. employees for the rape of impoverished women in Haiti and fathering hundreds of children. Since then, it appears the U.N. has done little to combat these atrocities.

In February of this year, a study by the University of Nairobi found that "sexual exploitation and abuse...continues to undermine U.N. operations" in Africa. The study notes that while the U.N. has a zero tolerance policy for these kinds of offenses, they hesitate to implement them for fear that countries will withdraw their peacekeeping forces if their soldiers are investigated for sex crimes.

Far from having a perfect record -- in fact they have one of the worst records on sexual abuse -- the U.N. tries with a fraudulent air of moral superiority to cast aspersions on the Church while ignoring their own horrendous record. Their hypocrisy is galling.

Further, only Israel and Burma (Myanmar) have been targeted more than the Vatican by OHCHR this month, and no other faith has been singled out.

Without a doubt, OHCHR loves picking on the Church. Maybe if the U.N. spent less time bashing Catholics and more time getting their own house in order, the world might be a better place.