U.S. Conference of Catholic Bishops Did Not Change Policy on Gay Adoption 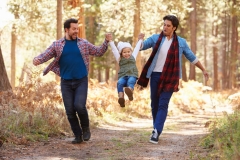 These distinctions are important to note, especially in light of a recent case involving a lesbian who sought to adopt a child through a sub-grantee of the United States Conference of Catholic Bishops (USCCB).

The best way to understand this case is to see how it unfolded.

In August 2020, a lesbian woman, Kelly Easter, inquired about a foster care program posted on the website of the Office of Refugee Resettlement (ORR). Less than a month later, she was told that her contact information was being sent to the USCCB.

The USCCB affiliate in her area of East Nashville, Tennessee is Bethany Christian Services, an evangelical entity that shares the Catholic Church's teachings on marriage, the family and sexuality.

After some email exchanges with Bethany, Easter found that it does not permit gays and lesbians to be foster parents. She learned shortly after September 21, 2020 that she could not participate in the ORR's unaccompanied-minor programs because she is a lesbian.

Bethany said it was bound by USCCB rules.

On January 22, 2021 (which just happened to be the 49th anniversary of Roe v. Wade), Easter told ORR that she is being discriminated against because she is a lesbian. On February 9, she was told ORR was "looking into this."

On March 1, the New York Times ran a story saying Bethany has changed its policy and no longer excludes lesbian and gay individuals from participating in its foster care programs.

On April 26, Easter was informed that Bethany was finalizing contracts for a new location for their program.

On June 24, Easter was told by Bethany that it had signed a contract with Lutheran Immigration and Refugee Service that would allow her to become a foster parent.

This should have been the end of the case, but it wasn't.

In August, Easter said she would not participate in the Bethany program because the Lutheran office that accepted her case was not in her home town of East Nashville; it was a half hour away in Smyrna.

On October 13, Easter filed a federal lawsuit against the Department of Health and Human Services and other administrative agencies for allowing the USCCB to discriminate against her because she is a lesbian.

Easter has now dropped her case, and that is because in February 2022 the USCCB said there was a misunderstanding about this case: it is not opposed to a single parent adopting a child, drawing no distinction based on sexual orientation.

In other words, the USCCB, following the teachings of the Catholic Church, rejects homosexual couples from adopting a child.

Homosexual individuals who are not in a marital relationship cannot be judged to having violated Church teachings on sexuality anymore than a single heterosexual individual would be who sought to adopt a child.

It is behavior that the Church objects to, not the status of a person.

William Canny, the USCCB's director of immigration and refugee services, explained, "In reality, neither the USCCB's religious beliefs nor its subgrant agreement with BCS (Bethany Christian Services) bars a single person with a homosexual orientation from serving as a foster parent by virtue of his or her orientation."

Lest there be any doubt about the position of the bishops on this subject, recall that on June 17, 2021, the U.S. Supreme Court sided with Catholic Social Services in Fulton v. City of Philadelphia saying that Catholic foster care agencies can reject gay couples from adopting children. The USCCB filed an amicus brief in that case.

The day after the decision was made, three chairman of the USCCB issued a statement saying, "This is a victory for the common good and for thousands of children who rely on religious foster care and adoption agencies to find a loving home with a mother and father which is their right."

Those who reject the Church's teachings on marriage, the family and sexuality, such as New Ways Ministry, have no reason to raise the flag over this case. The Church is not changing its position on marriage and foster care arrangements.