Trudeau is Guilty of 'Cultural Genocide' 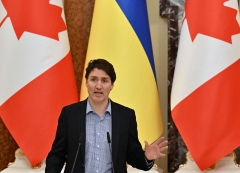 Pope Francis is in Canada apologizing for Christians who cooperated with Canadian government officials in assimilating Indigenous persons into society. The most serious charge against them, as outlined on p. 1 of the Introduction to the Report by the Truth and Reconciliation Commission of Canada, is that of "cultural genocide."

"Cultural genocide" is defined as the destruction of the "structures and practices" of a particular population; it seeks to eradicate their "political and social institutions."

On this score, Canadian Prime Minister Justin Trudeau is carrying out "cultural genocide" against his own people. Instead of touting the Report, he should spend his time applying the same analysis to his own policies. If he did, he would step down immediately.

Trudeau oversees a society grounded in the Judeo-Christian ethos, one that accepts as truth the teachings of the Ten Commandments and the tenets of Christianity. Instead of respecting his country's heritage, he is busy uprooting it, turning Canada into a militantly secular society that prizes the rights of the individual over the common good. As such he is guilty of "cultural genocide." Here are some examples.

The Catholic Church has consistently been opposed to abortion, and most practicing Protestants are also opposed, especially evangelical Christians.

For Jews, it is somewhat more nuanced. Nachama Soloveichik is an attorney who recently wrote a piece in the Washington Examiner that took issue with the liberal Women's Rabbinic Network for saying "abortion access is a Jewish value." He strongly disagrees.

"Abortion is not a Jewish value. Judaism believes that even a potential life is worthy of respect and protection." He adds that "At a minimum, even for those who believe abortion is permitted under certain circumstances, it is never a cause for celebration and is permitted only under hardship."

Now contrast these Judeo-Christian beliefs with that of Trudeau's. He is not only in favor of abortion-on-demand, he has acted tyrannically by mandating that every member of his Liberal party accept his position. "I have made it clear that future candidates need to be completely understanding that they will be expected to vote pro-choice on any bills."

Christians accept the Judaic teaching that homosexuality is sinful and that marriage is the preserve of a man and a woman. Not Trudeau. In 2016, he became the first prime minister to march in the Toronto Gay Pride Parade. He raised the rainbow flag on Parliament Hill, bragging how he was "standing up for LGBTQ rights." His passion for forcing people to abide by his stance was further demonstrated when he supported an amendment to the Criminal Code banning conversion therapy.

The Judeo-Christian heritage recognizes the uniqueness and complementarity of the sexes. Trudeau does not. He promotes the most radical transgender laws and policies imaginable, ones that declare war on the traditional conception of male and female.

For example, he did not object last year when a judge issued a warrant for the arrest of a father after calling his daughter his "daughter," and for referring to her as "she" and "her." His daughter considered herself to be a boy. That's just how insane and tyrannical the Canadian left has become, led by Trudeau.

Human rights were first established in Western  civilization, following the teachings of Christians and Jews. But having accepted the racist propositions inherent in critical race theory—all whites are racists— equality before the law is being eviscerated in Canada.

Trudeau is leading the way. He has even gone so far as to say that those who do not get vaccinated against Covid-19 "are often misogynistic and racist." He offered no proof.

All of these policies advanced by Trudeau tear at the heart of Canada's Judeo-Christian ethos, thus making him a sponsor of "cultural genocide." Worse, by pushing the agenda of critical race theory, which condemns "white privilege," he makes himself look like a rank hypocrite.

Like many "white privileged" boys, Trudeau inherited a fortune and was raised like a prince; he spent his summers growing up touring Europe and Asia. Today, his net worth is $85 million. He owns a sprawling 13,300 square foot mansion with 5 fireplaces, a tennis court, a wine cellar, 16-seater dining room, 3 swimming pools, 8 bedrooms, 10 bathrooms and a bowling alley.

That's quite a palace, but that's not where he spends most of his time. He lives rent-free in a 22-bedroom Georgian revival mansion that is maintained with public funds. Not sure if it has a golf course, or even a bowling alley.

Critical race theorists would argue that anyone who fits that profile qualifies as a "white supremacist."

Now how about them apples! The prime minister of Canada was born to privilege, evolved into a white supremacist, and is guilty of committing cultural genocide against his own country. What's not to like?