Transgender Mania Grips the White House, Despite Warnings From Europe... 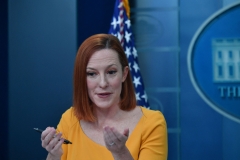 There is no such person as a transgender — you are either male or female — but there is such a thing as transgenderism: it is an ideology that promotes the fiction that the sexes are interchangeable.

To win, proponents are bent on getting to children, prompting little kids to question whether they are satisfied being a boy or a girl. If they are in doubt, they should be advised to at least consider making the switch.

There is no more rabid advocate of transgenderism in America than the president of the United States. Indeed, transgender mania has gripped the White House.

Within months, the Biden Administration will finalize changes to Obamacare that will make it easier for persons seeking to transition to the opposite sex. The Department of Health and Human Services is leading the way, treating gender identity as a status worthy of being covered by laws against sex discrimination. Changes will also be made to healthcare plans, so that sex-transition procedures can be covered.

This is a classic case of top-down politics. There is no national outcry demanding that those who want to flip their sex should be given the green light. If anything, there is a growing consensus that we need to hit the pause button on this subject.

When White House Press Secretary Jen Psaki recently said that "gender-affirming healthcare for transgender kids is the best practice and potentially lifesaving," she offered no evidence to support this outlandish claim. But she did make plain that gender-affirming care meant a) social affirmation b) puberty blockers c) hormone therapy and d) gender-affirming surgery.

This four-step approach is a sanitized way of saying that the White House is committed to encouraging the sexually confused to transition to the opposite sex, and that chemical castration and genital mutilation will follow.

Psaki also warned lawmakers who work against them that they have been "put on notice" not to mess with the president. She specifically said the White House will go after states that resist their agenda. She was supported by Health and Human Services Secretary Xavier Becerra who suggested he wants taxpayers to pay for the drugs, incisions, and genital reconstructions.

The White House says that gender-affirming care will help transgender adolescents who are suffering from suicidal thoughts and depression. They should first inquire why these young people are so messed up in the first place and then seek to give them the help they need. It is nonsense to argue that their problems are due to social rejection — their maladies are a function of their mental state.

Dr. Paul McHugh is a noted psychiatrist who has studied this issue as well as anyone. The Distinguished Service Professor of Psychiatry at Johns Hopkins Hospital maintains that transgender people suffer from a "mental disorder" and that "the idea of sex misalignment is simply mistaken — it does not correspond with physical reality."

Undeterred, the Biden Administration cites a Trevor Project survey to support its conclusion, never mentioning that two of the organization's donors, AbbVie and Allergan, make drugs and medical products that facilitate sex transitions.

Florida Gov. Ron DeSantis apparently was not "put on notice," or he is simply recalcitrant. His Department of Health has issued its own guidelines on this subject. It declared that because the evidence is inconclusive regarding sex-transition procedures, and could, in fact have "long-term, irreversible effects," the best way forward is to recommend against treating children and adolescents at this time.

To back up its stance, the Florida agency cited evidence that 80% of those seeking to transition lose their desire to do so over time. It also cited the serious health effects of making the change. There is good reason to support this position.

We could learn a thing or two from the Europeans; they have a richer history of dealing with those who are in rebellion against their nature.

The Amsterdam University Medical Center surveyed, between 1972 and 2018, 4,600 transgender men and women. It found that transgender medical treatment shortened the lifespan of patients by 50%. This is an astounding finding, one that should make everyone reconsider the conventional wisdom on this subject.

After allowing cross-sex hormone treatment in children for 22 years, Sweden slammed on the brakes and made the practice illegal. Its health officials said these procedures are "potentially fraught with extensive and irreversible adverse consequences such as cardiovascular disease, osteoporosis, infertility, increased cancer risk, and thrombosis." Denmark and France did the same thing.

It must also be said that the psychological problems these people have are every bit as serious as their physical condition.

We look back today at controversial medical treatments that have proven to be a disaster and wonder why we went down this road. Some day we will do the same with regard to sex-transition treatments, but by that time the psychological and physiological damage will have been done, thanks in large part to our "devout Catholic" president.

There is a reason why Pope Francis calls gender ideology "demonic." This mania has got to stop.