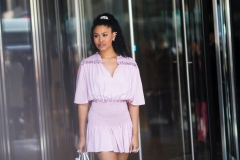 Many men used to read Sports Illustrated in their barber shop, and some subscribed to it. Always informative, and loaded with color photos, it was the quintessential sports magazine for men. No longer. How many men really want to see a man dressed in a woman's bathing suit featured on its cover?

The venerable sports publication has three cover swimsuit issues this year. One features rapper Megan Thee Stallion; one posts a photo of tennis star Naomi Osaka; and the third shows a picture of Leyna Bloom, a so-called trans model who is really a biological man.

Why is Sports Illustrated doing this? Like so many elites in the world of sports, those who run the magazine have turned left.

It flexed its left-wing muscles in 2017 when it depicted athletes and sports officials on the cover of its Sept. 26 issue standing in unison against President Trump. The photo showed NBA stars Lebron James, Steph Curry, and NFL CEO Roger Goddell in the front row linking arms; behind them were other left-wing sports personalities from baseball, football, and basketball.

The trans model on the cover of Sports Illustrated indicates that the magazine has gone beyond politics: It has clearly joined the culture war. This has been brewing for some time. In more recent years, it has become decidedly secular, even going so far as to sport an animus against Christianity. It has a particular disdain for Roman Catholicism.

One of the most virulently anti-Catholic organizations in the nation is the Freedom From Religion Foundation (FFRF). Sports Illustrated loves these bigots. That is why it has cited their work on many occasions.

The atheists at FFRF and the secularists at Sports Illustrated have joined forces to protest college football chaplains and coaches. There is no college football team in the country they despise more than Clemson University.

Coach Dabo Swinney, who is a practicing Christian, has earned their wrath for his very public pronouncements of his faith. They would like to silence him if they could. The hit job that Sports Illustrated did on him on in September 2019 is proof positive of its anti-Christian sentiment.

Last year, Sports Illustrated went for the jugular when it published a lengthy tirade against the New Orleans Saints. After noting that it was "a Catholic-named NFL team"—which was obviously disturbing to them—it attacked the team's owner, Gayle Benson, for her "close ties to the [Catholic] Church."

What was the problem? She gave advice to New Orleans Archbishop Gregory Aymond on how to handle some internal issues. No one did anything illegal—owners of sports teams consult with local secular and religious officials all the time—and, of course, Sports Illustrated knows this to be true. Its goal was to declare a selective allegiance to separation of church and football.

In 2013, one of the magazine's subscribers, author Andrew Klavan, went public with his decision to let his subscription to Sports Illustrated lapse. He cited an anti-Christian article by left-wing writer Mark Oppenheimer that appeared in that year's Super Bowl issue. "In the Fields of the Lord" was the last straw for Klavan, so laden with anti-Christian venom was it.

Two years ago, Sports Illustrated laid off around 40 employees. If it continues to play politics with its readers, it will have to lay off a lot more. Its hostility to Christianity is palpable, and it is this mindset that motivated it to flash a man in a woman's bathing suit on its cover.

Americans are increasingly fed up with elites in the sports world trying to shove their agenda down their throats. Sports is, by nature, purely apolitical. Which is why those who are making it political are out of step with millions of fans. The rebellion has only just begun.