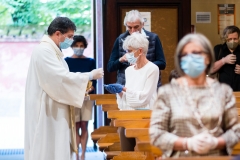 A Catholic League analysis of the way six states have responded to outdoor gatherings, church services, and protesters reveals disparate treatment: there is one set of rules for protesters and another for everyone else.

A directive was issued on May 25 by the State Public Health Officer that treated faith-based services and protesters equally. It said it would make "an exception to the prohibition against mass gatherings for faith-based services and cultural ceremonies as well as protests." Restrictions were placed on indoor gatherings, but those held outdoors were permitted, provided there was social distancing.

However, on July 6, a ban was placed on chanting and singing in churches. No restrictions were mandated for protesters. In fact, there was no attempt to ensure that protesters practiced social distancing.

In June, Gov. J.B. Pritzker placed restrictions on houses of worship, but none on protesters. He eased his most draconian restrictions at the end of June, but he still urged that singing and "group recitation" be curbed.

On June 4, the Department of Health asked that protesters get tested, but nothing was mandated. Indeed, nothing was done about limiting the size of the protests or maintaining social distancing. Moreover, the chanting and "group recitation" ban imposed on churches did not apply.

Gov. Charlie Baker put restrictions on indoor church services, but did not treat outdoor church gatherings any different than secular outdoor gatherings. However, some outdoor assemblies have been banned altogether: festivals, walk-a-thons, road and bike races, and organized athletic events with large numbers of spectators or participants are prohibited until further notice.

Gov. Baker did make one exception to his directive. He declared that  "outdoor gatherings for the purpose of political expression are not subject to this Order."

On June 15, the "Stay Safe MN" Phase III regulations issued by the Department of Health put restrictions on faith-based services, both indoor and outdoor. Health Commissioner Jan Malcolm warned that protest gatherings could pose a public health risk. She urged, but did not require, social distancing, wearing masks and hand-washing.

Protests were not limited in size, as were church gatherings, and no attempt was made to enforce any restrictions on these assemblies.

In June, four pages of mandated limitations on worship services were issued by the New York City Health Department, including a ban on individuals singing within 12 feet of one another. On June 26, a federal district judge issued a preliminary injunction on placing restrictions on church gatherings. Judge Gary Sharpe reprimanded Mayor Bill de Blasio and Gov. Andrew Cuomo for showing "preferential treatment" to protesters.

Unlike everyone else, contact-tracers are not allowed to ask New Yorkers if they participated in a protest. Last week, de Blasio went further, saying he is banning all parades through September. However, he said Black Lives Matter protests were too important to be subjected to the ban on large outside gatherings.

The state government's website puts forth restrictions on religious and faith-based organizations. It sounded the alarms by warning of "frequent reports of spiritual gatherings becoming COVID-19 'superspreader' events."

On the protests, most especially those that engulfed Seattle, the secretary of health could not bring himself to address the threats to public health posed either by the violence itself, or by the mass gatherings of people in close quarters. These assemblies were not seen as "superspreader" events.

These states, and there are others like them, put on grand display how thoroughly politicized public health issues have become. State and local executives, along with leaders in the medical profession, have made a mockery of their alleged interest in public health, making everyone doubt their sincerity. Their contempt for religious liberty is beyond question.

In doing so, they have belittled their status and increased the likelihood that their future directives and guidelines will not be observed.