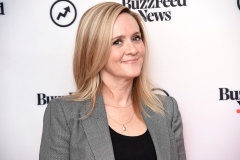 TBS is pushing Samantha Bee to the curb, which is not a strange place for someone who has spent her entire professional life in the gutter. After seven seasons, "Full Frontal" will not return in the fall.

Bee is one of the most filthy-mouthed entertainers in American history. She is also a relentless anti-Catholic bigot.

In 2018, she showed how low she can go when she called Ivanka Trump the "c-word." After being blasted by critics, which did not include the  National Organization for Women or the Feminist Majority, she issued an apology. "I crossed the line and I do apologize for that." She added that "A lot of women do not want to reclaim that word. They want it gone and I don't blame them."

A few nights later, she said that while she will refrain from using the "c-word," she admitted that it was her goal to "reclaim" it. As I said at the time, "Why would she want to normalize a word that if used to describe her own mother she would recoil?"

When this episode happened, Ben Weiss, an opinion writer for the New York Times, defended Bee and TBS. "TBS hired Sam Bee to be...Sam Bee. She's an edgy late-night comic. That's what she does."

Weiss is correct, though his observation is incomplete. Bee was chosen because she is a filthy-mouthed, anti-Catholic bigot. That's what she does.

Proof that Weiss is correct can be gleaned by considering her "comedic" content prior to starting her TBS show in 2016.

In 2010, she told NPR that she went to a Catholic school, even though her father is an atheist and her mother practices Wicca. She boasted that in her school, we "didn't have big gory Jesuses everywhere...couldn't see the blood dripping from the wounds." When asked why she likes to mock Catholicism, she answered, "That is pure pleasure for me."

Three years later, she obscenely attacked an archbishop who had raised concerns about the pro-abortion ties of the Girl Scouts. She replied, "if you don't want girls knocked up, and you won't let them have contraception, you better teach the Boy Scouts to use some of those fancy knots on their "d***."

In October 2016, on her new TBS show, Bee took aim at Catholic healthcare policies, as defined by the bishops. She said these "decisions affecting millions of American vaginas are being made by people who have never owned one or touched one." After showing a robed Catholic priest explaining healthcare directives, she said, "Thanks, Friar Suck. When I need reproductive advice from a virgin in a bathrobe, I'll let you know."

Many more examples could be provided. In 2017, she defended legislation that discriminated against the Catholic Church in New York by exclusively holding it accountable for alleged sexual abuse offenses, giving a free pass to the public schools. When I objected, she made me the object of her condemnations.

In 2018, I started a campaign to get sponsors of her show to stop advertising on it. It worked. By providing the email addresses of her most prominent sponsors to our members, and our list of email subscribers,  we were able to pick off seven sponsors: Verizon, Proctor & Gamble, Wendy's, Ashley HomeStore, The Wonderful Company (maker of pistachios), Popeyes, and Burger King.

TBS and Bee got the message and she stopped bashing Catholics.

Really talented comedians don't have to descend to the gutter to make people laugh. Bee does. That's because she's not capable of rising above it.