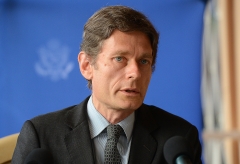 Rep. Tom Malinowski, a New Jersey Democrat, is back in the news for undermining parental rights once again. He is refusing to meet with parents who are livid about his defense of wholly inappropriate sexual instruction to young boys and girls.

During the COVID lockdown in 2020, parents across the nation learned what was really going on in their public schools. This hit home with many moms in New Jersey.

They learned, among other things, how some teachers and administrators were acting irresponsibly, offering classroom instruction on sexuality to young students that enticed them to consider whether they were satisfied with being a boy or a girl. If not, they were asked to consider whether switching to the opposite sex — which in reality is not possible — might be preferable. That they did this behind the back of parents underscored their deviant undertaking.

This did not sit well with Malinowski. He was not angry with school officials for violating basic ethical standards. No, he was angry at parents who objected to educators for bastardizing their role.

On March 15, I wrote Malinowski an open letter taking him to task for publicly berating concerned parents, portraying them as part of a "fringe group." A video of his intemperance discussing the issue of parental involvement in education was made public.

These parents were not complaining about discussions of the birds and the bees. Instead, they were complaining about inviting young boys and girls to question their sex identity. They also registered objections over showing them graphic depictions of men having sex with men. That anyone would criticize parents for objecting to these pornographic exercises is incomprehensible, unless, of course, he were actively supporting the radical gay agenda.

Not surprisingly, Malinowski is a member of the Congressional LGBTQ+ Equality Caucus. He is totally committed to the most radical proposals espoused by activists representing this community. As such, he is working against parental oversight of their children's education.

He received such pushback over his extremist stand that he agreed to meet with parents on April 19. The meeting never happened. After he cancelled it, he rescheduled it for May 21. He cancelled that one as well.

Apparently, this is not the first time Malinowski has had a problem with transparency. It was reported in 2021 that he had "bought or sold as much as $1 million of stock in medical and tech companies that had a stake in the virus [COVID] response." He failed to disclose these trades as required by federal law.

The Associated Press noted that "The trades were just one slice of a stock buying and selling spree by the congressman at this time, worth as much as $3.2 million, that he did not properly disclose." Subsequently, two complaints were filed against him with the Office of Congressional Ethics.

Worse, Malinowski had earlier promoted himself as a beacon of ethics. In April 2020, when COVID fears were at a height, he boasted, "This is not the time for anybody to be profiting off of selling ventilators, vaccines, drugs, treatments, PPE (personal protective equipment), anywhere in the world."

Malinowski found himself in even deeper trouble when congressional ethics investigators found "substantial reason to believe" that he violated federal conflict-of-interest rules. He tried to worm his way out of this jam by saying he has "an overwhelmingly busy job." But he wasn't so busy that he didn't have time to flout the law by enriching himself off the pandemic.

It all fits like a glove. Malinowski has failed to be transparent with his unethical wheelings and dealings, and he has failed to be upfront with  parents. Playing fast and loose with financial transactions is bad enough, but when mothers are verbally abused for protecting their children from sexual engineers, we have reached a new low, even for congressmen.

The mothers, fathers, and children of New Jersey deserve straight answers to their pointed concerns. The time has come for Malinowski to address them with dispatch, without rancor or reprisal.