'The Playboy Philosophy' at 60

Hugh Hefner founded Playboy in 1953 and cleverly sought the support of the ruling class. He wanted to break new ground, creating a girly magazine that featured distinguished public figures, including those in government, law, education, finance, the arts, the media, music, entertainment, acting, sports, and the corporate world. By drawing on celebrities, business tycoons and the literati, he made Playboy respectable.

If the magazine was seen as respectable, Hefner was anything but. He had sex with men, women and dogs. He was accused of raping multiple women, forcing some to have an abortion, and got "Deep Throat" star Linda Lovelace so high on alcohol and drugs that he and his Playboy Mansion guests got her to perform oral sex on a German Shepherd.

If all Hefner did was to live the life of a pervert, that wouldn't have had such a societal effect. What did have a lasting effect were the several installments of "The Playboy Philosophy." It was launched almost 60 years ago in December 1962.

Hefner came from what he called a "very repressed" Christian family, blaming his Protestant parents for this condition. He set out to rectify the problem by attacking religion, using "The Playboy Philosophy" as his weapon.

By happiness, not surprisingly, he meant pleasure. "Happiness and pleasure are mental and physical states of being and society should emphasize the positive aspects of both." It would be hard to find a more anti-Christian philosophical statement than this.

Hefner was prone to caricature his foes, especially people of faith. "This nonsense about the body of man being evil, while the mind and spirit are good, seems quite preposterous to most of us today." But whoever said the body was evil? It is true that his Christian critics often said he debased the human spirit with his fixation on sex, and indeed degraded men and women in the process, but that is a far cry from saying they believed the body was evil.

The founder of Playboy also attributed to his critics the belief that "nudity and obscenity [are] nearly synonymous." This was typical of "The Playboy Philosophy"—passing off baseless assertions as truth. He further maintained that "a satisfactory definition of obscenity can never be established." Spoken like a man who was a master of moral relativism. No wonder he spoke with utter derision about laws based on Christianity and Judaism that forbid incest and bestiality [this may explain his interactions with Fido]. 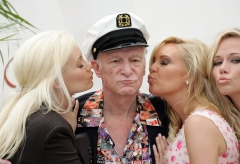 Hefner rightly saw in Christianity, especially Catholicism, a sexual ethic that is the antithesis of "The Playboy Philosophy." He claimed there was not enough separation of church and state and that freedom from religion was being neglected. As usual, he was given to overstating reality. "Church-state legislation has made common criminals of us all." His proof? Alfred Kinsey, the sex creep who allowed children to be sexually abused in his research undertakings.

Finally, "The Playboy Philosophy" treated selflessness as a sin. "We oppose the tendency to meaningless selflessness in our present society"; he singled out self-sacrifice and self-denial for condemnation.

Hefner's obsession with satisfying primordial individual appetites did not allow him to appreciate that selflessness is a virtue, one that is best expressed when we sacrifice for the good of others. Mother Teresa exemplified this virtue better than anyone.

For Hefner, there was nothing more important than happiness, which he defined as pleasure. Therefore selflessness was seen as irrational. This juvenile understanding of the human condition colored much of his thinking.

Moral decline in America is the result of many factors, but only a fool would conclude that "The Playboy Philosophy" did not contribute to it.