Pelosi's Communion Stunt at the Vatican 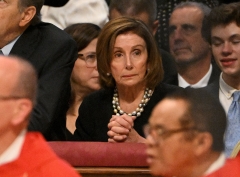 House Speaker Nancy Pelosi attends a mass for the Solemnity of Saints Peter and Paul on June 29, 2022 at Saint-Peter Basilica in the Vatican. (Photo credit: TIZIANA FABI/AFP via Getty Images)

House Speaker Nancy Pelosi, who rejects the Catholic Church's teachings on abortion, marriage, and sexuality, received Holy Communion on June 29 at a papal Mass in St. Peter's Basilica. The pope was in attendance, but did not give out Communion.

Pelosi's stunt was done to undercut her bishop, San Francisco Archbishop Salvatore Cordileone: he has told her not to present herself for Communion, citing her lust for abortion rights.

Archbishop Cordileone invoked canon law to deny Pelosi Communion, so there is no issue there: He is in total compliance with Catholic teachings. But given the autonomy that bishops have, those who oversee other dioceses are not bound by what Cordileone decreed.

Pelosi received Communion from one of the many priests who were distributing it; he obviously did not know anymore about her than he does the man on the moon. And unlike Cordileone, he never reached out to her, seeking to counsel her on this subject. So the two are not comparable.

The priest did what was expected of him — he gave Communion to everyone waiting in line to receive it. For all we know, non-Catholics may have received Communion at the same Mass. That doesn't excuse those who willfully exploited the sacrament.

So where does this leave us?