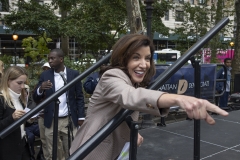 It would be hard to beat the enthusiasm for abortion shown by former New York Gov. Andrew Cuomo, but the current governor, Kathy Hochul, has at least matched his zealotry. Both identify as Catholic.

Hochul has previously invited women from states with restrictive abortion laws to come to New York to abort their child. She is very inclusive, save for the rights of the unborn.

In May, in a demonstration of how much she cares about the safety of abortionists, she directed the Division of Criminal Justice Services to coordinate $10 million in funding for "safety and security capital grants for abortion providers and reproductive health centers to further secure their facilities and ensure the safety of patients and staff."

What makes this so nauseating is the rash of violence against pro-life facilities nationwide, as well as plans to conduct a "Night of Rage" against them following the release of the Supreme Court ruling in Roe v. Wade. Yet Hochul refuses to afford them the kind of protection she offers abortion clinics, none of which have been threatened or torched.

On June 13, Hochul signed legislation to protect abortion rights ahead of the expected high court decision on Roe. She also took the opportunity to declare war on crisis pregnancy centers. The bill she is promoting authorizes an investigation of these entities.

It is essentially a form of harassment. According to Jim Harden, who operates the Buffalo pro-life center that was targeted, the bill will require crisis pregnancy centers to turn over information on donors and confidential patient records. This is phase one. The second phase will be a host of regulatory measures designed to crush them.

What Hochul is doing proves beyond a shadow of a doubt that pro-abortion activists never believed in "choice" for women. Real choice means being allowed to have access to those who offer advice and services on both sides of the abortion issue. She wants to kill the pro-life message.

It is only fitting that Hochul has now branded pro-life people "Neanderthals." Like Hillary Clinton before her, who called her critics "the deplorables," Hochul is showing her contempt for anyone who disagrees with her pro-abortion policies.

It's important that New Yorkers find out more about who Kathy Hochul really is. She is the face of darkness and death.