No, Thanksgiving Should Not Be a 'Day of Atonement' 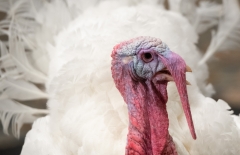 The Left hates America, so naturally it hates anything that has to do with our Judeo-Christian heritage, and that ineluctably means Thanksgiving.

The latest attack is courtesy of Yahoo.com, which is increasingly home to left-wing news stories and opinion pieces. In a recent column by Chelsea Ritschel, she rehashes the claims made in 2006 by Robert Jensen, a retired professor from the University of Texas at Austin. He suggests we scratch Thanksgiving altogether and atone for our sins.

"One indication of moral progress in the United States would be the replacement of Thanksgiving Day and its self-indulgent family feasting with a National Day of Atonement accompanied by a self-reflective collective fasting." We need to do that because of the "massacre of hundreds of Pequot Indian men, women, and children" at the hands of the English.

Actually, it is Jensen who needs to atone. More on that later.

The Pequots were never a large tribe, and they were never wiped out by the Puritans. Their descendants are recognized today by the federal government and are one of the recognized tribes in Connecticut. The Puritans had political rights to Indian lands, but never property rights. In fact, as Woods makes clear, "the colonial governments actually punished individuals who made unauthorized acquisitions of Indian lands."

Moreover, each colony worked cooperatively with the Indians to secure land, offering metal knives and hoes as well as clothing and jewelry. "The Puritans recognized Indian hunting and fishing rights on lands that the Indians had sold to them," writes Woods (his italics).

Then there are the Catholic roots to Thanksgiving that Jensen and his ilk do not want to discuss. Author and host Eric Metaxas has done the best work on this subject, recalling the travails and triumphs of Squanto, a brave Patuxent Indian boy.

In 1608, when Squanto was 12 years old, he was kidnapped by English colonists and was taken to Spain as a slave. Fortunately for him, some monks bought him. They cared for him, taught him their language, and introduced him to Christianity. The monks knew the young Indian Catholic boy wanted to go back to America so they sent him to live with a London merchant, John Slanie, and his family. He learned English well, and after spending five years with the family, he boarded a ship to America.

Squanto arrived in Plymouth, Mass., which is where he grew up. He was stunned by what he found: everyone he knew was dead. Contrary to what left-wing liars say, they were not bludgeoned to death—they died of smallpox. According to Metaxas, the Pilgrims "basically adopted him." Lucky for them, he spoke English and was able to help them.

Indeed, Squanto "showed them everything there was to know. He showed them how to catch fish, where the lobsters were, how to tread the eels out of the mud in the stream beds. He basically single-handedly showed them how to survive." Gov. William Bradford of the Plymouth colony wrote in his journal that Squanto was a special person sent by God.

As a tribute to the bond they had established, Squanto and the Pilgrims celebrated a Thanksgiving dinner. The custom originated in 1621 when Bradford recognized a day of public praise and prayer after the first harvest. The first national observance did not occur until President Washington, at the request of Congress, named Thursday Nov. 26, 1789, as a "day of public thanksgiving and prayer."

The Left does not want us to acknowledge the truth about Thanksgiving. They want us to atone.

We should never atone for the sins of others. Indeed, it is a cheap ploy, a political weapon used by left-wing haters who want to brand innocent Americans today for the alleged (often contrived) offenses of people they never knew.

But if there is to be a National Day of Atonement, it should be either May 1, International Workers' Day, or Labor Day in September. Left-wing professors and activists should atone for their defense of Marxism and its bloody history. Stalin, Mao, Pol Pot, and other communist genocidal maniacs are responsible for murdering approximately 150 million people in the 20th century, all in the name of workers' rights.

Meanwhile, let's all partake in "self-indulgent family feasting" on Thanksgiving and thank the Lord for our Catholic-rooted national holiday.