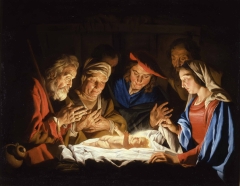 Today, the Catholic League erected a life-size nativity scene in Central
Park, on a piece of public property in front of the Plaza Hotel, between 58th and 59th Street on 5th Avenue. We received a permit from the New York City Parks Department, as we have for decades.
There are no Santa Clauses, reindeers, Jack Frosts, or any other secular symbols surrounding our religious display. We don't need to have them. Why? Because Central Park is a public forum, a place that is open to all ideas, concerts, artistic exhibitions, and the like. So the government cannot stop us from erecting our crèche.
So why do some say that religious symbols cannot be displayed on public property unless they are accompanied by secular symbols? They would not be correct if they were referring to a public forum, but they would be correct if they were referring to a swatch of public land near a municipal
building, such as city hall. The difference there is that it could be argued that the proximity of the
religious symbols near a municipal entity might be interpreted as government sanction of religion. That argument cannot reasonably be made if the land is a public forum. Practicing Christians, Jews, and
others, need to understand the difference so as to avoid unnecessary
problems.
We hope that New Yorkers, and those visiting New York City this Christmas season, will stop by and see the Catholic League's nativity scene in Central Park. It will be up through the New Year.