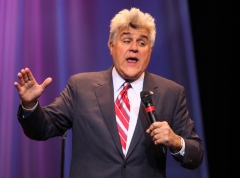 One night after retiring, former "Tonight Show" host Jay Leno performs to a sold out crowd in the Event Center at the Borgata Hotel Casino & Spa on May 30, 2009 in Atlantic City, NJ. (Photo credit: Tom Briglia/FilmMagic)

Longtime NBC "Tonight Show" comedian Jay Leno has come out of retirement to apologize to Asian Americans for the bigoted jokes he told about them while hosting the late-night show. Will Catholics be next to receive an apology? Not a chance. The culture is too anti-Catholic to induce Leno to do so.

From 1997 to 2015, I wrote well over a dozen news releases taking Leno to task for insulting Catholics; I only addressed his most offensive remarks. For example, our files show that in one time period alone, from April 1996 to January 2012, we recorded 37 jokes Leno told about Catholics, some of which were inoffensive and some of which were not (only the latter merited a news release). In addition, I wrote many letters to his executive producer, Debbie Vickers, about his comments.

"Whenever we received a complaint," Leno recently said, "there would be two sides to the discussion: Either 'We need to deal with this' or 'Screw 'em if they can't take a joke.'" Regarding his anti-Asian jokes, he now recalls, "Too many times I sided with the latter even when in my heart I knew it was wrong."

In the late 1990s, Leno concluded he needed "to deal with" a complaint I lodged. He called me in February 1997 to discuss my concerns; I posted a news release following our discussion. I explained to Leno "why jokes about the Eucharist are not synonymous with jokes about Catholic school traditions." He said he understood the distinction. He added that he tells 11,000 jokes a year and may sometimes go over the line. Fair enough. The conversation ended amicably.

Unfortunately, a few years later Leno started in again. Most of his  favorite "jokes" portrayed all priests as molesters. Evidently, he took the "Screw 'em if they can't take a joke" approach; he never reached out to me again.

The single biggest problem the Catholic League has had with comedians like Leno is their penchant for making sweeping generalizations. Of course there have been miscreant priests. But to indict tens of thousands of innocent priests because some are rogues is indefensible.

If it is wrong to negatively generalize from the individual to the collective about other demographic groups, why is it acceptable to condemn all Catholic priests for the offenses of a few? And it's not just Leno who has dumped on priests during his monologue. Many comedians have, and they have done so for years. Yet they are careful not to offend others, and if they do, they apologize.

All we have ever sought at the Catholic League is parity. We don't ask for preferential treatment vis-a-vis other groups. We simply want a level playing field. Regrettably, that remains an elusive goal.