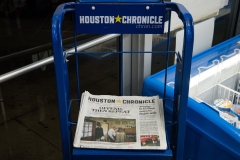 This photo taken on Feb. 12, 2019 shows the front page of the Houston Chronicle featuring a story on accusations of abuse in Southern Baptist churches at a gas station in Houston, Tex. (Photo credit: LOREN ELLIOTT/AFP via Getty Images)

Orthodox Jews, Muslims, Mormons, and many other faith communities have all sorts of internal strictures governing modesty provisions (especially for women), sexual practices, and dietary rules that others may find disagreeable. But the media rarely say a word about them. Nor should they—it's none of their business. However, their reticence does not apply to Catholics.

In its July 1 editorial, the Houston Chronicle lectures the bishops about matters that they should leave alone. Not to be misunderstood, when the Catholic Church takes a public policy stand on any issue, it is fair game for criticism. But when it comes to internal matters, such as the sacraments, it is no more the business of a newspaper than it would be the business of the bishops to opine on the hiring practices of a newspaper.

The editorial tells the bishops they are wrong to even consider denying President Biden Holy Communion.

"Biden, who attends Mass and says he personally opposes abortion," the editorial says, "has nevertheless throughout his political career supported the legal right for women to decide for themselves to have one."

The paper is factually wrong to say that Biden has been a champion of abortion rights "throughout his political career." In 1974, a year after Roe v. Wade legalized abortion, Biden said the ruling went "too far" and that a woman seeking an abortion should not have the "sole right to say what should happen to her body."

In 1976, Biden voted for the "Hyde Amendment," which bans federal funding of abortions. In 1981, he introduced the "Biden Amendment," which prohibits foreign-aid funding of biomedical research involving abortion. In 1982, he voted for a constitutional amendment allowing states to overturn Roe v. Wade. In other words, in the decade following Roe, he had a mostly pro-life record.

In 1983, however, he reversed himself and voted against a constitutional amendment allowing states to overturn Roe. That was the beginning of his pro-abortion stance.

After telling the bishops they are wrong to consider denying Biden the Eucharist, the editorial then contradicts itself when it admits that "what the bishops decide about who may take part in sacraments is their decision. If lay Catholics don't like it, they can leave the church or press the bishops to reconsider." Well said. Why, then, did it violate these precepts in the remarks that preceded this concession?

Even more baffling, why did the newspaper then pivot and start lecturing the bishops again? It immediately said that "we'd like to remind the bishops of the words of Pope Francis." Next, it opines that if the bishops are going "to begin excluding politicians from communion on the basis of just one of those morale crusades," it is guilty of "cherry-picking."

What happened to the dictum that "what the bishops decide about who may take part in sacraments is their business"?

The editorial is a mess, from top to bottom.