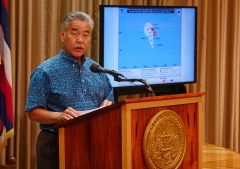 Hawaii's new abortion law yields different fruit. The bad news is that feminists are once again endangering the lives of women. The good news is that fewer doctors want anything to do with abortion.

Feminists scored another victory this week by championing a law in Hawaii that allows nurses to perform an abortion. In a time when lawmakers demand that every segment of the population be afforded the highest standards of medical care, it is striking to note that there is one exception: The credential bar is actually being lowered for abortionists; Hawaii is one of several states that allow non-physicians to perform an abortion.

If a woman were to have her tooth extracted, instead of her baby, the qualifications of those doing it would be more exacting.

Hawaii now allows women seeking an aspiration abortion to bypass a hospital or clinic and get it done in a nurse's office. How convenient. As Thomas D. Williams accurately puts it, this procedure involves putting "a vacuum to suck the fetus out of her mother's womb through the cervix." While most of these abortions are without complications, not all are, and that is where the danger lies for the woman.

The difference in training that doctors and nurses go through is considerable. After graduating from college, obstetrician/gynecologists must complete another eight years of training. Nurse practitioners are done in two years after college. Quite frankly, they are not equipped to handle serious problems that may arise.

Common issues following an abortion include vaginal and intra-abdominal hemorrhage, infection, intravascular issues, complications of anesthesia, heart attacks, and strokes. Other problems occur following incomplete abortions. This is serious: Non-physicians are almost three times more likely to preside over an incomplete abortion than are physicians.

What happens to a woman in need of a doctor after having an abortion? If she is lucky, she may be attended to by a physician at a nearby hospital. That's assuming the nurse's office isn't too far away.

Obstetricians are trained to bring life into the world, not end it. This explains why so few of them want to do abortions. It also sheds light on why some states keep lowering the bar so that those not repulsed by doing them are accommodated.

What makes this so obscene is that persons not trained as physicians are operating on women in the name of women's liberation. So much for equity in healthcare.