Get Ready for the White House to Milk the Pope Visit 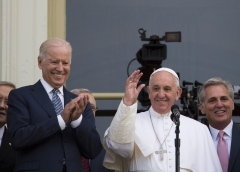 Pope Francis (C) waves, next to Vice President Joe Biden(L), on a balcony after speaking at the US Capitol building. (Photo credit: Andrew Caballero-Reynolds/AFP via Getty Images)

President Biden is scheduled to meet with Pope Francis in Rome on Friday. For the pope, it will be routine: he meets with heads of state all the time, and he has no compelling reason to meet with Biden. The reverse is not true: Biden is in trouble with U.S. bishops and needs to milk this event for all it's worth.

When Biden, who identifies as a Catholic, was elected, his stark departures from serious Catholic moral teachings gave many of the bishops pause.

Los Angeles Archbishop José Gomez, president of the United States Conference of Catholic Bishops (USCCB), expressed concerns about the signals that the president would be sending to Catholics. To be specific, if Biden were adamant in his public rejection of Catholic moral teachings and is perceived to be in good standing with the Church, how would this play with Catholics in the pews?

The White House knows that the president will be on the minds of the bishops when the USCCB meets in a few weeks in Baltimore. It is in their interest, then, to put a happy face on the meeting with the pope. The optics are critical: pictures of the two men smiling and shaking hands will be posted everywhere.

To what end? It's a defensive strategy. This will enable the Biden team to argue that although some of his policies depart from, or undercut, Church teachings, they are of no real consequence.

Biden is not only pro-abortion, he has become increasingly more rabid in his support for abortion rights the older he gets. For most of his career in politics, which spans a half-century, he at least put the brakes on his support for publicly funded abortions. No more—the brakes are shot.

Biden not only supports gay marriage, he officiated at one. And as president, he has shown his contempt for the Church's teaching on gender ideology, even going so far as to promote to admiral a man who falsely claims to be a woman. Worse, the president refuses to label sex transition surgery on minors as child abuse.

When it comes to religious liberty, Biden has taken several steps to undermine it, the most egregious example being his support for the Equality Act. If it were to become law, the federal government could arguably order Catholic hospitals to perform abortions.

So what are Biden and Pope Francis expected to discuss when they meet? COVID, climate change, and poverty. It doesn't get much safer than that. These are three subjects that are easier to oppose than resolve. In short, the White House has seen to it that the issues which divide the pope and the president—marriage, the family, sexuality, religious liberty—will not be on the agenda.

The White House hopes that the staged image of Biden and Pope Francis together will weaken, if not neuter, criticisms by the bishops of the president. They certainly don't expect the president to fall in line with the teachings of his religion. That would cost him the goodwill of his secular base of supporters, and that is priority number one.