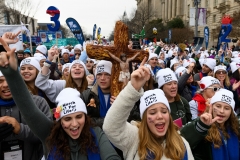 The controversy over a Texas pro-life law has led some to make irresponsible remarks, and no one has topped Attorney General Merrick Garland. The law, which forbids doctors from performing an abortion on a mother carrying a baby whose heartbeat can be detected, provoked Garland to make totally unfounded claims of violence on the part of pro-life activists.

On Sept. 6, Garland said, "We will not tolerate violence against those seeking to obtain or provide reproductive health services, physical obstruction or property damage in violation of the FACE Act." This indictment of pro-life activists is without merit. Indeed, it is a despicable smear against them.

If pro-life Americans are so violent, Garland should be able to rattle off the names of abortionists whom they have killed. In the 21st century, there have been four such killings: one in 2009 and three in 2015. Two men, both ex-cons, were responsible, and neither was assisted or associated with a pro-life group. They acted alone.

In 2009, Dr. George Tiller was killed by Scott Roeder. When it happened, I condemned it. "We have to get the message out that life means we have to respect all life," I told CBS Evening News, "including somebody as bad as Dr. Tiller was."

Tiller, by his own admission, performed over 60,000 abortions. His specialty was killing babies in utero who were nearly born, or were partially born. Hence his nickname, George "The Killer" Tiller.

Roeder was a deranged man who was hardly representative of pro-life activists. He had been diagnosed as schizophrenic, and got into trouble when he stopped taking his medication. His wife testified that she thought he was bipolar, and his brother also spoke about his mental problems. He had previously been arrested for carrying explosives, and he spent time in prison for other violations.

In 2015, Robert Lewis Dear Jr. killed three people in a Planned Parenthood clinic in Colorado Springs, Colo. He had previously been arrested and convicted for carrying a "long blade knife" and illegally possessing a loaded gun.

His mental state was worse than that of Roeder's. A judge ordered him to undergo a mental competency exam to see if he was sufficiently competent to represent himself. After fielding the results, the judge ruled that Dear was not mentally fit to stand trial: he cited findings that he suffered from a "delusional disorder." Dear was sentenced indefinitely to a Colorado state mental hospital.

It makes no sense for anyone who champions the abortion-rights cause to worry about being killed because of the Texas law. Roeder and Dear were lone wolves, both of whom had a criminal record and mental problems.

Garland, being a pro-abortion proponent who works for our "devout Catholic" pro-abortion president, has been noticeably silent on threats to pro-life activists. Yet just this summer, innocent pro-life Catholic demonstrators were harassed by pro-abortion militants in Brooklyn, New York, and a Catholic church in Louisville, Colo. was defaced with pro-abortion slogans.

On Monday, U.S. Supreme Court Justice Brett Kavanaugh, who dismissed a challenge to the Texas law, was subjected to intimidation when his home was descended upon by pro-abortion activists. This came following a threat by extremists from ShutDownDC to "directly" confront Kavanaugh and his family.

If Garland were even-handed, he would know that pro-life Americans have been violently attacked and been subjected to death threats for many years. There have been bomb threats against Catholic churches,  firebombings of Catholic school buses with pro-life signs, calls for violence against pro-lifers on college campuses, and widespread acts of church vandalism.

And lest we forget, while the killing of unborn babies is legal, the fact remains that abortion clinics are a much more deadly place for children than they are for those who do the killing. Think about that, Mr. Garland and Mr. Biden.