Does Buttigieg Really Have a Husband? 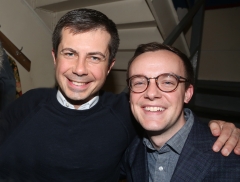 Transportation Secretary Pete Buttigieg recently told Fox News host Brett Baier that his travel expenses were not inappropriate, especially given that other public officials have taken their spouses on official business trips. “Why is it any different when it’s me and my husband?” Baier had no answer.

Does Buttigieg really have a husband? Of course not. He may love  Chasten but he can never be his husband. Why not? Because he has been disqualified by nature.

Buttigieg’s “marriage” is recognized by the positive law, or by what lawmakers and judges posit, but it is not recognized by the natural law. The natural law, which was first promulgated by Aristotle and Cicero (and later amended by Aquinas), holds that morality is a function of human nature, and that we can arrive at moral strictures on the basis of observation and reason.

As human beings, Aquinas said, we are given to three natural inclinations, one of which is reproduction (the others being self-preservation and reason). Reproduction has been ordained by nature, and nature’s God, as the province of a man and a woman. Two men cannot reproduce anymore than two women can. It therefore makes no sense to say that people of the same sex can marry.

Marriage exists so that the sex drive of men and women can be constructively channeled in such a way as to provide for stable families, without which children suffer. But only people of the opposite sex are capable of performing this function (even allowing for the reality that some are sterile).

There is an anatomical goodness-of-fit to a man and a woman that permits them to become one flesh, and it is this union—and only this union—that allows them to reproduce. This is natural. Without a male and a female mating, the world would come to an end. Deviations from this are therefore unnatural.

Think of it this way. It is an axiom of natural law that everything has a law that is built into its nature. For example, it is a law of electricity that if we want to generate it, we must insert the plug into the socket. Having two plugs or two sockets touch each other delivers no juice. Plugs and sockets are related, but they are different, and attempts to conjoin them always render sterile results.

Here are some other analogies.

No man can have a husband anymore than a man can bear a child. He can say he does but that doesn’t make it true. If someone introduced his uncle to a stranger, saying, this is my aunt Joe, no one would believe him. Those who have blue eyes can claim they have brown eyes, but that doesn’t change reality. A left-handed person can claim to be right-handed, but observation tells us otherwise. Gorillas  do not give birth to kangaroos.

Nature can be stubborn. It is not a social construct. It is fixed. The sooner we learn this truth, the better off our society will be.

So what should we call Chasten, if he is not Buttigieg’s husband? His partner. The two of them may not like it, but truth is not determined by what is popular. It is determined by what makes sense according to nature and nature’s God.