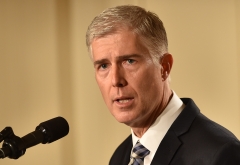 There are many problems with the majority opinion written by Justice Neil Gorsuch on workplace discrimination, sexual orientation, and gender identity, but none is more important than the flawed anthropology upon which the ruling rests. In fact, it is pivotal.

"An individual's homosexuality or transgender status is not relevant to employment decisions." This sweeping statement, which will be cited in every lawsuit on this subject, is manifestly false.

If a man volunteers to be a Big Brother, working with fatherless boys, and decides to "transition" to a woman, he cannot reasonably be expected to do the job he was hired to do. He deliberately changed the required profile. This should clearly be grounds for termination.

The next sentence written by Gorsuch explains his anthropological flaw. "That's because it is impossible to discriminate against a person for being homosexual or transgender without discriminating against that individual based on sex."

He is wrong again.

Take the case just cited. The employee should be terminated not because of his assigned sex—indeed he was hired precisely because he was a man—but because he is no longer capable of offering the kind of paternal counseling that only a man can provide.

In other words, it is entirely possible to discriminate against a transgender person without discriminating against his sex, as assigned at birth.

Gorsuch concedes, as he must, that sex, sexual orientation, and gender identity are not the same.

As Justice Samuel Alito aptly put it, "repetition of an assertion does not make it so, and the Court's repeated assertion is demonstrably untrue."

Gorsuch tries hard to persuade by offering several hypothetical examples, all of which Alito seizes upon to great effect. For example, he says that if a female staffer, who was rated a "model employee," were to bring her same-sex partner to a holiday party, and was subsequently fired because she is a homosexual, it would mean she was treated that way because of her sex, not just her sexual orientation.

"This example disproves the Court's argument because it is perfectly clear that the employer's motivation in firing the female employee had nothing to do with that employee's sex. The employer presumably knew that this employee was a woman before she was invited to the fateful party. Yet the employer, far from holding her biological sex against her, rated her a 'model employee.' At the party, the employer learned something new, her sexual orientation, and it was this new information that motivated her discharge."

The sex of a child can be known before he is born. But his sexual orientation cannot. The former requires no volition; the latter does. They are therefore not identical.

Being a male or a female is similar to being black or white: sex and race have no inherent normative content. That's because they are fixed properties and do not speak to behavior, which has moral consequences.

Indeed, it is precisely because homosexuality is not identical to sex that virtually all of the world's great religions, in western and eastern civilization, have passed judgment on its practice, without passing judgment on the sex of the participant. The two concepts are distinct and do not ineluctably bleed into each other, despite what Gorsuch claims.

Similarly, gender identity is a behavioral concept that is quite independent of one's sex. Anatomical surgery and hormone therapy are chosen, unlike one's sex. They are undertaken because the person elects to change his sex (which he cannot do in any real sense—no one can change his chromosomal makeup). It is done because the person does not like what nature has ordained, therefore making it erroneous to conflate sex with gender identity.

Consider the language chosen by Alito and Gorsuch to refer to a newborn's sex. The terminology is not only different—it explains why their legal reasoning differs.

Gorsuch refuses to employ "assigned at birth" because it would undercut his conviction that sex is a fluid concept. He wants to advance the notion that our sex is a matter of identity, which is a psychological construct, and not a matter of human nature, which of course it is. He is the one conflating sex, sexual orientation, and gender identity. This represents his personal conviction and in no way should be treated as if it were a truism.

Trying to minimize, if not deny, the existence of human nature necessarily yields bad outcomes, both in terms of law and public policy. Most Americans want separate sports teams and restroom facilities for men and women. They understand basic differences based on sex and do not appreciate elites who say they are wrong. They also understand how unjust and indecent it is for men to compete in women's sports and shower in women's locker rooms simply because they believe they are female.

It is never helpful when the courts seek to solve problems that barely exist, especially those that touch on the moral order. To cite one example, there are no known cases where a Catholic school has fired a teacher because he happens to be a homosexual. But there are many cases where a homosexual teacher has been fired after it was publicly disclosed—often by the teacher—that he is married to his boyfriend. Activist lawyers will now test the limits of this Supreme Court decision.

Gorsuch's majority opinion, which is based on bad anthropology, makes for bad law and will now make for bad public policy. Had it been a more narrow ruling, tailored to specific instances of workplace discrimination, there would be no tidal wave of lawsuits. But now that the moral order has been further diced and spliced by the courts—thanks to this classic case of judicial overreach—it is a sure bet there will be.