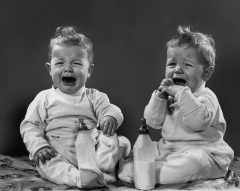 The Born-Alive Survivors Protection Act says that an infant born alive following an abortion is a “legal person for all purposes under the laws of the United States,” and as such must be attended to by medical staff or transported to a nearby hospital for care.

Democrats offered two arguments against the bill: (a) they said it is already illegal for doctors and nurses not to care for any individual, therefore no new legislation is necessary, and (b) it may actually be dangerous to transport an infant to a hospital.

When it comes to combating racial discrimination, or discrimination against LGBT persons, Democrats can never get enough legislation on the books, but for some reason when it comes to infants born alive following a botched abortion, no new laws are necessary. Yet it was one of their own, Virginia Governor Ralph Northam, who openly said he was against attending to such children.

Four years ago, Northam explained his support for a pro-abortion bill that codified his position.

It is true that transporting an infant who survives an abortion to a hospital could be dangerous. There is a way to fix this, but the same Democrats who make this pitch have already said no to it: only physicians should be allowed to perform an abortion. But Democrats across the country have argued in favor of allowing non-physicians to perform an abortion, so it is disingenuous of them to now complain of the unavailability of physicians at abortion clinics.

These are the same people who routinely condemn the January 6 riot—where the only person who died that day was an unarmed female veteran protester—but never condemn the widespread violence committed by Black Lives Matter demonstrators and Antifa terrorists.

The fact is that scores of crisis pregnancy centers and churches have been blown up and desecrated in the run-up to, and following, the Dobbs decision that returned the issue of abortion to the states. No such violence has devastated abortion clinics. Indeed, what the pro-abortion side labels as “violence” against clinics includes “anti-abortion protesters congregated outside abortion clinics.” That’s what most Americans call free speech.

The lust for abortion, combined with the refusal to condemn violence against pro-life Americans, is a black mark on the Democratic Party. That almost none of them find this problematic is deeply disturbing.