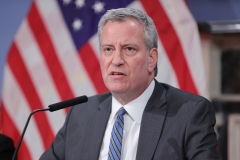 In 2020, de Blasio, and then Gov. Andrew Cuomo, told religious New Yorkers that they could not congregate in their house of worship because doing so would violate their social distancing mandate. Catholics and Jews sued and they won.

In his ruling, federal district judge Gary Sharpe called attention to the mayor and the governor's discriminatory rulings. He noted that they allowed mobs to protest racial injustice without abiding by social distancing norms, and in doing so they "sent a clear message that mass protests are deserving of preferential treatment."

De Blasio's vaccination mandate on yeshivas and parochial schools is being done, he says, to treat religious and public school employees the same. This, however, ignores our nation's long history, grounded in the First Amendment, of extending religious exemptions from government edicts on a wide range of issues. To conflate public and religious institutions is constitutional nonsense.

State governments are also pushing back against federal overreach in mandating vaccinations. The state of Oklahoma has sued President Biden and Defense Secretary Lloyd Austin for ordering a vaccine mandate for the state's National Guard.

Rabbi David Zweibel, chairman of a group that represents religious and independent school leaders in New York City, correctly noted that "this is an area where government should be using its bully pulpit to persuade, not its regulatory arm to coerce."

There is something else going on here that is troubling. De Blasio's mandated vaccination for religious school employees begins Dec. 20. The last day of school in Catholic schools in the New York Archdiocese, before the Christmas break, is Dec. 23. De Blasio's last day in office is Dec. 31.

This is a ploy. De Blasio is intentionally leaving his successor, Eric Adams, with a lot of baggage. The mess he has created, on many fronts, will take months, if not years, for Adams to rectify. This is his parting shot. It is aimed not simply at Catholics and Jews, but at Adams and his new administration.

The sooner the courts issue de Blasio another corrective, the better. He should do us all a favor and take an early retirement.