The Dark Side of 'Indigenous Peoples' 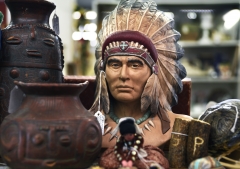 A plaster bust of an American Indian chief wearing a feather headdress or war bonnet is among items for sale in an antiques shop in Grants Pass, Ore. (Photo credit: Robert Alexander/Getty Images)

Editor's Note: This is part 3 of 3 on Catholic League President Bill Donohue's series on Columbus Day. Here are parts one and two.

Serious historians know that when it comes to war, different parties to a conflict have had different motives, ranging from the just to the unjust. They also know that it is a rare occasion when all sides are equally innocent or guilty. To be sure, some may be more aggressive, but it is a mistake to assume that had the vanquished been in possession of the means to do so, they would not have been as vicious as the victors. Not all the losers in war were noble.

This needs to be said in light of what is now fashionable every October—Columbus-bashing is all the rage. Just as bad, some promote the idea that virtually all the Indians were kindly souls who respected the land and treated each other with dignity. This is a romantic fairy tale having no basis in history. The truth is that some were gentle while others were brutal.

It is also part of the conventional wisdom that almost all the Indians were massacred by the white man. Wrong.

Historian William D. Rubinstein, in his book, "Genocide," writes that "recent historians sympathetic to the plight of the American Indians at the hands of European settlers from 1492 onwards have repeatedly noted that while 95 percent of Indians living in the Americas perished (according to those historians) over the century or so after the coming of the white man, most of this diminution in population occurred through such factors as the importation of virulent diseases previously unknown in the Americas, the destruction of settled life-styles, enslavement, and the psychological effects of conquest rather than through overt murders and slaughters, although plenty of these took place."

On the flip side, we have some commentators who want to portray the Indians as savages who never contributed to America's greatness. They, too, are wrong.

The Indians served with distinction in World War I and World War II. Indeed, during World War I they enlisted in the Army in greater numbers, proportionally, than non-Indians. In World War II, tribes with strong warrior traditions volunteered, again with "disproportionate numbers."

Before detailing the dark side of Indigenous peoples, as a corrective to the prevailing notion that only the white man acted unjustly, it is important to note that the term "Indigenous" is misleading. The Indians were immigrants who came here from Asia. In "prehistoric times," they "crossed the land bridge across the Bering Strait to the lands of the Western Hemisphere."

The following is a selection of practices that were common to some Indian tribes.