Biden Is Clueless on Transgender Youth 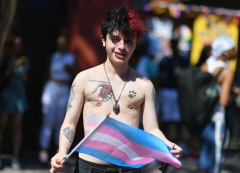 It was reported on April 1 that President Biden took the opportunity on "Transgender Day of Visibility" to commend the parents of transgender children for "affirming your child's identity," saying it is "one of the most powerful things you can do to keep them safe and healthy."

This was not an April Fool's joke. No, this is the mindset of the president and an administration that purports to being compassionate, but in reality is promoting child abuse on a massive scale. No need to impute malicious motive — cluelessness will do.

It's too bad they don't actually listen to the stories of young people who have undergone this abnormal process.

A recent story in The Telegraph about an English girl who transitioned to a boy, and back again, is heartbreaking. The Wednesday article is titled, "I Was Allowed to Transition at 18 Without Question — But I Regretted It." Here is a synopsis of her travails.

Allie was raised in Lancashire "in a very masculine environment." Because her mother worked nights, she was cared for by her father. She shared a home with two stepbrothers, who were eight years older than her. Her parents divorced when she was 11. In that same year, she became convinced that she was "meant to be a boy."

Allie learned through the Internet about trans people and thought this might be the answer to her condition. She decided she was "meant to be born male." Initially, she found herself sexually attracted to girls, but then realized she was bisexual. At age 12, she suffered from anxiety and depression. She spent the next year fluctuating between feeling "girly" one day and wanting to "dress like a man" the next day.

At 14, Allie was sexually abused by a stranger after "being groomed online." Four years later she decided she wanted to transition to a boy.

"The big narrative being pushed is that transition will be the answer to all your problems," she said.

This is exactly the position of the Biden Administration. It turned out to be tragically wrong.

Allie's private doctor prescribed testosterone so she could transition. He never once attempted to explore "the possible causes of my gender dysphoria, such as my mental health problems or my difficulties fitting into society (my emphasis)." Thus did she prove to be more astute than her doctor.

Not only that, but she was given a "30-minute phone consultation." In fact,  she never had "a face-to-face consultation." When she was given her prescription, there was "no exploration of my sexual trauma, and no mention of my upbringing and how that could have affected things." No one told her about possible side effects, "such as heart problems and loss of bone density, or the extent to which it could impact fertility."

The first year after she transitioned she was "over the moon." Her body became more muscular and her periods stopped. She felt "a lot more emotionally stable" and was treated well by her friends. This was all good, except that she came to the conclusion that she "was never completely comfortable." She knew something was wrong, and events proved she was right.

During her first year at the University of Lancaster, she experienced "a bad mental health episode." She attempted suicide and was diagnosed with autism.

When Allie turned 20, she realized that "I really wanted a family — and I had chosen to self-sterilize for no good reason." She then decided to transition back to being a female [she never really became a male — nature made that impossible], partly because "ever since transitioning, my menstrual cycle has been an absolute mess." She is now being treated for polycystic ovary syndrome.

Allie was 11 when she learned of her mental health problems, and began to transition when she was 18. This needs to be said if only because she is a lot older than the young people Biden wants to empower. He is encouraging children to "go with the flow," telling parents they need to be supportive.

At one of the presidential debates in 2020, Biden threw his support behind children as young as 8 and 10 who think they want to transition to the other sex:

"The idea that an 8-year-old child or a 10-year-old child decided, you know I want to be transgender. That's what I'd like to be. It would make my life a lot easier. There should be zero discrimination."

Note that Biden sees this issue in terms of discrimination, not mental or physical health. This is the kind of robotic response he has been trained to develop.

Of course, chemical castration and body mutilation are the real issues, not discrimination. Nobody thinks that eight and ten-year olds are being discriminated against because they cannot drink alcohol, drive a car, or vote. Responsible adults are committed to the psychological and physiological wellbeing of children — they don't allow them to be exploited by irresponsible adults.

At some point in the future, historians will look back at this period in history and wonder why so many prominent Americans aided and abetted child abuse. That day can't come too soon.