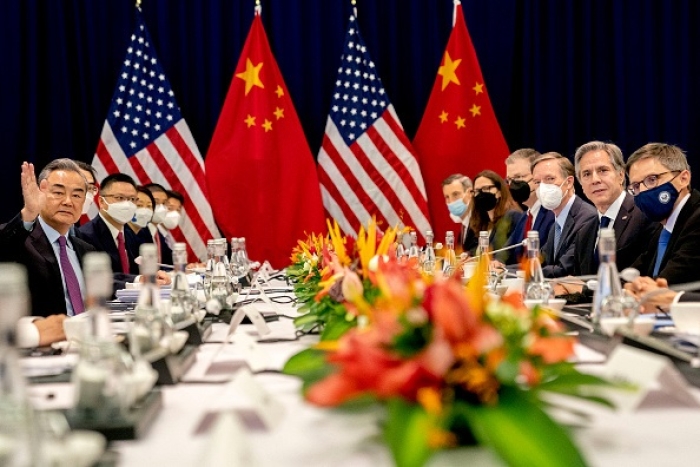 This week, the Chinese government announced its fierce opposition to Speaker of the House Nancy Pelosi, D-Calif., visiting Taiwan.

Chinese Foreign Ministry spokesperson Zhao Lijian said that China was "fully prepared... If the U.S. is bent on going its own way, China will take firm and strong measures to defend national sovereignty and territorial integrity."

In response, the Biden administration announced its discomfort with Pelosi's visit: Biden told journalists that military officials thought the trip was "not a good idea."

Meanwhile, The Wall Street Journal reported that the Chinese government had accelerated its push to re-shore the manufacture of semiconductors. According to the Journal, "China is leading the world in building new chip factories, a step toward achieving more self-sufficiency in semiconductors that could eventually make some buyers reliant on China for many of the basic chips now in short supply."

That news ought to be disquieting for those who understand the flow of semiconductors, the single most important commodity on the planet, a component of nearly every major technology used today. Taiwan manufactures approximately 92% of advanced semiconductors; South Korea manufactures nearly all of the rest.

China's dependence on foreign semiconductors is one of the world's best hedges against Chinese attacks on Taiwan: should China attack Taiwan, Taiwan could destroy its semiconductors and infrastructure.

But if China can ramp up its own domestic manufacture while everyone else is behind, China is in a solid position to blackmail the world economy in the same way Russia has using its energy supply.

And China isn't unaware of their growing advantage. Gen. Mark Milley, chairman of the Joint Chiefs of Staff, said the Chinese have become far more aggressive in recent years.

International relations expert Shi Yinhong, who works at Beijing's Renmin University, told the Associated Press that China "will take unprecedented tough measures and the U.S. must make military preparations" if Pelosi should visit.

So, what ought the West to do?

First, the United States must stop acting as though China will change its tack any time soon. Xi Jinping has upped the ante over recent months in advance of his next party congress; he is likely to continue upping the ante as his economic and demographic model turns upside down.

The long-term future for China is dismal: China's economy is a paper tiger rooted in debt, and China simply doesn't have the population growth necessary to support its massive spending. This means that China sees its window for action closing.

Second, the United States must realize it is already in a Cold War II with the Chinese government. This means ramping up our own domestic economic capacity — unleashing the economy through deregulation, energy production and tax reduction; refunding the military at the levels necessary to sustain a two-front war, and rebuilding the navy, which has shrunk to ship numbers lower than the United States had preceding World War II; diversifying supply chains for goods and services necessary to the United States, reshoring those supply chains away from China; and cutting off China's access to cutting-edge technologies.

This also means that the United States must refocus its energy and ire externally rather than internally. Americans have expended an enormous amount of time, money and energy on attacking one another, on turning inward; the result has been a cancerous politics that results in the continuing dissolution of our social capital.

During the Cold War, most Americans understood that the enemy wasn't at home, it was the communist tyranny threatening the U.S. and her allies; during Cold War II, Americans must learn the same lesson again.

(Ben Shapiro is a graduate of UCLA and Harvard Law School, host of "The Ben Shapiro Show," and Editor-in-Chief of DailyWire.com.)