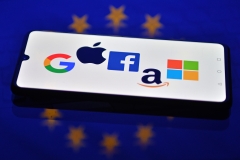 Time and time again, corporations bent the knee before outraged activists and stifled the free speech of ordinary Americans. We see this when social media giants regularly censor and ban individuals who run afoul of liberal orthodoxy. President Trump rails against this phenomenon for good reason--it undermines our fundamental liberties.

Less noticed is the threat of financial de-platforming. This growing menace means those who dissent from the official left-wing line won’t even be allowed to bank or use a credit card. Fortunately, there is a new proposal that could put an end to this nefarious trend.

The Office of Comptroller of the Currency recently drafted the "Fair Access to Financial Services" rule that would ban major banks from denying service to customers for non-financial reasons. The public can currently offer its opinion on the proposal through Regulations.gov.

It stipulates that major banks may “not deny any person a financial service the bank offers except to the extent justified by such person's quantified and documented failure to meet quantitative, impartial risk-based standards established in advance by the covered bank.”

So if a customer has solid financial credentials, the bank cannot deny him service even if they find his political views “offensive.”

The OCC’s proposal notes that this problem isn’t just limited to the Right--it affects all political persuasions.

“The pressure on banks has come from both the for-profit and nonprofit sectors of the economy and targeted a wide and varied range of individuals, companies, organizations, and industries,” the proposal states. “For example, there have been calls for boycotts of banks that support certain health care and social service providers, including family planning organizations, and some banks have reportedly denied financial services to customers in these industries.”

“Some banks have reportedly ceased to provide financial services to owners of privately owned correctional facilities that operate under contracts with the Federal Government and various state governments,” reads the proposal. “Makers of shotguns and hunting rifles have reportedly been debanked in recent years.”

There is some evidence that left-wing groups need to worry about financial blacklisting, but the primary victims of it are those associated with right-wing causes.

Take for example privately-run immigration detention facilities. Companies involved in this critical service have been punished by all the major banks. Institutions such as JPMorgan Chase, Wells Fargo and Bank of America cut ties to private detention facilities, blocking their ability to obtain a line of credit.

Banks are not supposed to have the power over our political speech--the OCC leadership gets that. “Banks don’t set national policy. They don’t choose what goods and services are available to consumers. Nor do they determine which industries are legal,” OCC acting comptroller Brian Brooks and OCC chief economist Charles Calomiris wrote in a Wall Street Journal op-ed.

The likely targets of de-platforming understand this threat and back the Fair Access to Financial Services rule.

“If major banks get to benefit at the expense of the American taxpayer, especially at times when many Americans are struggling to make ends meet, then, at a minimum, they can be required to respect those same Americans’ constitutional rights,” the NRA-ILA wrote in support of the rule.

The rule is also supported by a wide array of Republican senators, from moderate Lisa Murkowski to solid conservative Ted Cruz. This growing chorus shows a party waking up to this menace to our fundamental liberties. It’s the job of our elected leaders to make the laws and guard our freedom. It’s too dangerous to give those powers to corporations that buckle at the slightest pressure from left-wing activists.

The OCC’s Fair Access to Financial Services rule will ensure American greatness survives in our censorious age. Every American who cares about free expression should comment and give their support.

Bay Buchanan is a conservative activist, author, and pundit. She served as U.S. treasurer in the Reagan administration and then as a senior adviser to Pat Buchanan, Tom Tancredo, and Mitt Romney.