No Meat or Cars for You, Says the World Economic Forum 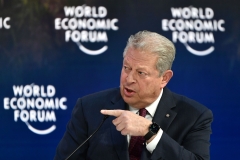 Years ago, the World Economic Forum totalitarians devised a formula for the commoners’ eternal happiness: owning nothing and having no privacy.

In 2023, Klaus Schwab and the rest of the James Bond villains in Davos, Switzerland, proposed various methods to increase the plebs’ pleasure and facilitate servitude to the New World Order, be it paying for the war in Ukraine for the next 15 years or forcing one billion people to stop consuming meat. Thankfully, a glance at the Twitterverse suggests a collective “how dare you!” uttered by the same people the real-life SPECTRE wishes to enslave.

The next blueprint of fascism might be the international digitization of vaccine records. During a discussion about containing the next outbreak and preventing another pandemic, former British Prime Minister Tony Blair advocated for digital libraries that can store people’s vaccination status worldwide.

He urged all nations to establish a “proper digital infrastructure” to determine who did and did not inject vaccines into their systems, adding that health care digitization is critical. “In the end, you need the data: you need to know who’s been vaccinated and who hasn’t been,” he said.

Former Vice President Al Gore should direct a doomsday film since his imagination keeps producing many apocalyptic scenarios for mankind. While on stage at the World Economic Forum, Gore became unglued and warned that the planet will soon endure “rain bombs,” “boiling oceans,” an “open-air sewer,” and a daily climate crisis equivalent to “600,000 Hiroshima bombs.” Gore also alluded to “xenophobia” and “political authoritarian trends” as contributors to Mother Nature’s destruction.

“That’s what’s boiling the oceans, creating these atmospheric rivers, and the rain bombs, and sucking the moisture out of the land, and creating the droughts, and melting the ice and raising the sea level, and causing these waves of climate refugees,” Gore shrieked.

The Nobel Prize and Oscar winner told the audience that he has been “sounding the alarm” for the last two decades and concluded that humanity is “failing” on this issue, despite the trillions being spent worldwide and a wide array of climate-related policies and taxes being imposed on the population.

Sen. Joe Manchin (D-WV) is ostensibly not a fan of the First Amendment, telling the World Economic Forum that “the problem we have is the open press system and basically all the platforms.” Manchin averred during a panel that social networks “personify the extremes,” although they are not the majority. After his comments went viral, he appeared on the Fox Business Network a day later and backtracked his remarks, apologizing and clarifying that he “didn’t explain it properly.”

The Spirit of John McCain Lives

Finnish Prime Minister Sanna Marin suggested that Western governments need to support Ukraine in its fight against Russia for “as long as it takes, even if the war lasts 15 years.

The 34-year-old world leader thought that a Russian victory would send the wrong message to nations worldwide that they could invade other countries and succeed. “I think the only message that we need to send is that we will support Ukraine as long as needed,” she said in an interview with CNN’s Fareed Zakaria. “One year, two years, five years, ten years, 15 years.” This sounds much like former Sen. John McCain (R-AZ), who argued for fighting in Iraq for 100 years.

The Great Reset of Your Diet

You will stop chewing the fat and instead eat replacement meals in 20 years and be happy! This idea is no longer confined to the digital pages of the World Economic Forum website. Instead, it was a concept delivered again by Jim Hagemann Snabe, the chairman of Siemens AG. At a panel talk called “Mobilizing for Climate,” Snabe recommended one billion people to stop eating meat because it would reduce carbon emissions.

“If a billion people stop eating meat, I tell you, it has a big impact. Not only does it have a big impact on the current food system, but it will also inspire innovation of food systems,” he averred. “I predict that we will have proteins not coming from meat in the future, they will probably taste even better. So why are we trying to mimic meat if we can have a better taste? They will be zero carbon and much healthier than the kind of food that we eat today.” No mention of eating beetles and drinking cockroach milk? Come on, man!

No Cars for You!

Saudi Arabian Minister of State for Foreign Affairs, Adel Al-Jubeir, predicted that there would be no cars in the future. But this is not necessarily a ban on automobiles. Instead, according to Al-Jubeir, “it’s called different types of transportation … based on renewable energy.” As usual, these leaders will own cars, fly on private jets, and ensure that they never ride on public transit with the public.

Slovenia Foreign Affairs Minister Tanja Fajon demanded that countries submit to the globalist agenda by declaring their “respect” for “the world order.” In a discussion about global fragmentation, Fajon shared her fellow globalists’ disdain for states that are fighting back against internationalist rules and embracing the “national interest.” In the end, Fajon told the world that “we have to take into consideration The World Order.” Yeesh. All that was missing from this inane diatribe was Benito Mussolini’s hand gestures.

Morgan Stanley CEO James Gorman summarized the annual retreat in the remote Swiss town by calling it an “echo chamber … where everybody’s basically repeating back to each other what they’ve heard from the last person.” Indeed, it is a yearly gathering of globalist gobbledygook, leftist lamentations for individualism, and authoritarian announcements for the future.

Speaking of tomorrow, the World Economic Forum made a bold prediction: It is time to fear an imminent and damaging cyber attack in the next few years. So, let the polycrisis begin, and bow down to the Schwabinator.