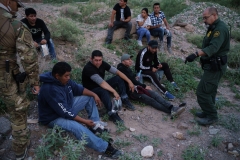 A July 29 post focused on reports that COVID-positive migrants were being housed in quarantine — but not isolation — by an NGO in the border city of La Joya, Tex. Local officials claimed that they had no idea that this was occurring, despite the risks it posed to the local community. It appears the same NGO has been housing other COVID-positive migrants in nearby Weslaco, and that they have been told to shut up about it. Who is hiding the facts in the Rio Grande Valley?

On July 29, Weslaco Mayor David Suarez released a statement in which he explained that the Catholic Charities of the Rio Grande Valley (CCRGV), a non-governmental organization, has been “temporarily housing” COVID-positive migrants at the Texas Inn in Weslaco. Catholic Charities is the same NGO that was reportedly housing the migrants in La Joya, at the Texas Inn there.

Suarez’s statement was measured, but reflected his obvious concerns about the situation:

Providing us with further information can save lives....We take this matter very seriously, and our priority in Weslaco has been and continues to be the health and wellness of our community. We graciously ask Catholic Charities of the Rio Grande Valley to help us protect all lives, including those most vulnerable to COVID-19 complications.

Weslaco also asked the NGO to “detail what protocols are in place to ensure immigrants are provided food, water and other resources during their stay at the motel, so that COVID-19 positive individuals can safely remain in quarantine.” The city apparently does not want them to go on any fast-food runs of the sort that brought the La Joya migrants to the attention of the authorities.

Weslaco and its mayor have good reason to be concerned about “the health and wellness” of the people of Weslaco.

The recent “Delta variant” strain of the novel coronavirus is, according to researchers at Yale, more contagious than prior ones (by the end of July it was responsible for 80 percent of new COVID cases in the United States), and could lead to what they term “hyperlocal outbreaks” in communities with low vaccination rates.

Had officials in La Joya and Weslaco been informed that there were large numbers of COVID-positive migrants being housed in their communities (with apparently few restrictions on their movement in La Joya, at least), health authorities could have taken steps to ensure that residents prioritized vaccinations.

Of course, whether those communities should be forced to accept large numbers of COVID-positive illegal migrants is a different issue. By law, as I explained on July 29, those migrants are supposed to be detained, in part to prevent the introduction of any such communicable illnesses into the United States.

That said, even though it is crucial to the health and wellness of communities like La Joya and Weslaco to know whether COVID-positive migrants are being housed therein, Bill Melugin, from Fox News, tweeted:

NEW: I asked the executive director of Catholic Charities of the Rio Grande Valley how many COVID positive migrants they are currently housing in local hotels. She told me “I have been advised not to comment.”

A second hotel has been confirmed. Texas Inn in Weslaco. @FoxNews pic.twitter.com/AWNGXaBsII

According to its website, the executive director of CCRGV is Sister Norma Pimentel. I do not know Sister Norma personally, but many people I know and trust are familiar with her, and they describe her as a very warm and forthcoming person. And she made Time magazine’s “100 Most Influential People of 2020”, so she is plainly a force to be reckoned with.

A sister of the Missionaries of Jesus, Sister Norma was a fierce critic of the immigration policies of then-President Donald Trump, and thus is not afraid to speak her mind. Who exactly could tell such a woman that she could not comment when asked about an issue of local — and national — importance?

CCRGV describes itself as the “charitable branch” of the Roman Catholic Diocese of Brownsville.

A Catholic myself, I can assure you that the church is a “top-down” organization, and that doctrine — and information — flows through its hierarchy. It seems unlikely to me, however, that the Bishop of Brownsville (head of the diocese), or even the Archdiocese of Galveston-Houston (which oversees the Brownsville diocese) would want to conceal the facts that Malugin was seeking.

That leaves just one obvious party — the Biden administration. Let me explain.

A letter from Sister Norma states: “The recent actions and statements of state and local leaders restricting the ability to assist and care for recently-arrived immigrant families fills me with great sadness.”

This is an apparent reference to an executive order issued by Texas Gov. Greg Abbott (R) on July 28, which prohibits the private transport of “migrants who have been detained by CBP for crossing the border illegally or who would have been subject to expulsion under the Title 42 order.”

Sister Norma was likely also referring to local officials like Hidalgo (Texas) County Judge Richard F. Cortez, who “call[ed] on federal immigration officials to stop releasing infected migrants into our community” in response to the La Joya incident (he had some choice words for Abbott’s COVID policies, too).

In that July 29 letter, Sister Norma asserted that:

Catholic Charities of the Rio Grande Valley (CCGRV) with the support and partnership of [the] exceptional community in McAllen and in the greater Rio Grande Valley, including the U.S. Customs and Border Protection (CBP), have worked tirelessly to provide humanitarian assistance to the many immigrant families who have been given permission to be in the United States.

That “permission” came from CBP, in carrying out the administration’s release policies.

She continued: “The families we assist at the Humanitarian Respite Center in McAllen, Tex., have been released from federal custody and arrive at our shelter through daily coordination with CBP, the city and local community volunteers and CCRGV staff.”

Thus, coordination with CBP in the release of aliens is essential to CCRGV’s success in its mission of caring for migrant families.

Criticism of the Biden administration’s policy of releasing illegal migrants who are apprehended entering illegally in the midst of the COVID pandemic (and the emergence of the Delta variant) has been ramping up of late, and that criticism has been heightened by the revelations that COVID-positive migrants have been released to CCRGV in La Joya and Weslaco.

Plainly, the Biden administration would want to tamp down such complaints, but to do so it must either close the border and expel all illegal migrants, or alternatively conceal the true extent of the problem.

It is highly unlikely that it plans on changing its border-release policies (as misguided and unlawful as they are) anytime soon, so telling people in the know like Sister Norma not to comment about the extent of the problem would be its only solution.

As explained above, however, concealing the number of COVID-positive migrants who have been released to the care of NGOs like CCRGV and not revealing where they have been sent puts local governments at a significant disadvantage in controlling the spread of COVID.

Again, the Delta COVID variant is highly contagious, and a “hyperlocal outbreak” could overwhelm health resources (including hospital beds) in the small towns that dot the Rio Grande Valley. If the Biden administration is obstructing disclosures about COVID-positive migrants who have been released into those towns for political reasons, it needs to stop and put the facts out there. Viruses call for disinfectants, and as Justice Brandeis once said: “Sunlight is said to be the best of disinfectants”.

Andrew “Art” Arthur serves as resident fellow in law and policy for the Center for Immigration Studies, a Washington, D.C.-based research institute that examines the impact of immigration on American society.

Editor's Note: This piece originally appeared on the Center for Immigration Studies.