Who Decides Who and What Is Essential and Which Lives Matter? 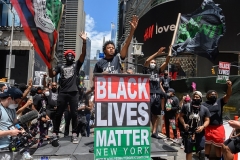 It has been two weeks since my motorcycle crash on I-35, at the speed of 75 mph. I just cannot reiterate my sincere and humble gratitude for the outpouring of prayers.

As you are reading this missive, I am undergoing surgery on my right shoulder socket to repair the fracture. It is a bit of a struggle to sit and prepare the missive, and I am experiencing neck pain. However, God’s grace has enabled me to survive and even get back into my running routine, back to four miles.

Sunday morning as I was running, I reflected on this thought: Who decides what is “essential” and whose life matters?

First, let us acknowledge that this nation is united in the disgust over the murder of George Floyd by four bad law enforcement officers. Then something changed. Radical leftist organizations such as Black Lives Matter stepped in and made a decision about how much Floyd’s life mattered.

George Floyd, regardless of prior criminal record, was a human being who deserved dignity. He was compliant and handcuffed, not offering any resistance. But in the past week, violence ensued; and yes, looting is violence.

A retired police captain named David Dorn was shot to death in St. Louis. David Dorn was a black man, responding to a call for assistance to check the security system at a local small business. He arrived to find looters who shot him, and there is video of Officer Dorn bleeding out.

Are we to believe that George Floyd’s life matters more than that of David Dorn?

Based on the response from the progressive socialist left and its media platforms, we are led to surmise that is the case. Hardly any attention and outrage resulted from Dorn’s death, as if he were collateral damage, an acceptable loss.

So, which Black lives matter? And when?

We have been through this COVID-19 response fiasco, where elected officials took it upon themselves to decide who and what is essential. In doing so, they made the decision as to whose lives mattered, and whose livelihoods mattered.

The result has been many being forced into destitution, some even committing suicide, as they watched their businesses forced into failure. In the aftermath of the George Floyd murder, innocent small business owners have had their businesses destroyed. And the response to their pleas was that they have insurance; or, it is just property.

The issue here is that the mob is deciding, based upon their agenda, whose life matters. The mob has taken it upon themselves to once again enact situational ethics to advance their goals and agenda. Why should we “Defund the Police” over the actions of four police in Minneapolis, Minnesota?

All I am seeking is consistency. If Black Lives Matter, then they matter all the time, in every instance. And truthfully, All Lives Matter! Several Black teenagers brutally stabbed to death 18-year old Barnard College student Tessa Majors, a young white female, in New York City. Her life matters. Yet there were no marches, riots, violence, looting. Was it a hate crime, racism? That is of no consequence -- she was targeted and killed.

Now we are supposed to have all these discussions about systemic racism in America. How about we discuss holding individuals responsible for their actions and improving conditions in our urban population centers?

Let us stop going backwards and talking about slavery. There is not a single person alive today that was a slave or owned slaves. It is imperative that we resist the fueling of irrational emotionalism and media instigation. I want consistency and reject the politicized rage that serves a particular ideological agenda.

There are bad people in any and every career pursuit in America. We must end the collective demonization of any one group, including law enforcement officers. But the most vital issue in America right now is to stop enabling elected officials and the rule of the mob to determine who and what is essential -- and whose lives matter.