The Shared History of NAACP and Black Lives Matter 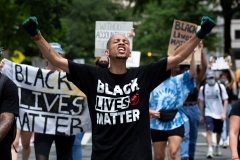 A protester shouts at a line of policemen at Lafayette Square near the White House on July 4, 2020. (Photo by JOSE LUIS MAGANA/AFP via Getty Images)

“Those who fail to learn from history are doomed to repeat it.”
(Quote attributed to George Santayana)

If American Blacks are to truly overcome, the time has come for them to stop being driven into irrational emotionalism.

Somehow, in the Black community, reason and rational thought have taken a backseat to the acceptance of thoughts, perspectives, and ideologies that are not consistent with the “proclaimed” principles and values over which many in the black community shout “hallelujah” on one particular day of the week -- Sunday.

Why are we watching a community self-implode but go right along “whistling past the graveyard” in addressing its real, true issues.

I believe the fountain from which this irrational emotionalism flows has to do with organizations that have been established in the Black communities, along with the charlatans who lead these organizations.

I want to present a short comparative analysis between two of them -- the National Association for the Advancement of Colored People (NAACP) and Black Lives Matter (BLM). There are some very interesting lessons to be learned from understanding these two organizations.

First, let’s take a look at the NAACP. Full disclosure:  My Mom, Elizabeth Thomas West, was a life member of the NAACP.

The NAACP was founded in New York on February 12, 1909 by four white progressives. Their names were Mary White Ovington, William English Walling, Henry Moskovitz, and Oswald Garrison Villard. Of course, they sought out a black man named W.E.B. DuBois to be the face of the organization they envisioned.

DuBois, who had been an ally of my ideological mentor, Booker T. Washington, took the NAACP towards a more protest-oriented approach to civil rights for Blacks. Washington took a more reasoned approach of education, entrepreneurship, and self-reliance. The schism that permeates to this day was then created.

The early leftists in America had established a more intelligentsia-based movement that looked upon the method of Booker T. Washington as demeaning. From there, we get the moniker “sellout,” which is still prevalent in these days. Washington wrote “Up From Slavery” and was a renowned educator and orator who hosted one US president and dined with another. DuBois wrote “The Soul of Black Folks” and was a sociologist.

But what is quite amazing is the life of W.E.B. DuBois, a man who was an avowed socialist, then communist, and ultimately renounced his American citizenship. So, what about the organization that chose DuBois as its figurehead? Just as with those who founded it, the NAACP has become nothing but a political arm of the Democrat Party, the modern progressive socialists.

When was the last time you heard about the NAACP taking a position for educational freedom (school choice)? When have you heard the NAACP speak out against Planned Parenthood or the genocide of 20 million unborn black babies since Roe v Wade?

I have yet to hear the NAACP voice any concerns about the rampant shootings, black on black, in our American urban population centers. Nor has the NAACP spoken out about the decimation of the traditional nuclear black family, and the failure of President Johnson’s Great Society welfare, nanny-state policies?

I guess the NAACP represents the “establishment” aspect of an organization created by leftists.

That brings us to the new, radical organization created by leftists that proclaims to care about Black lives, but has proven only to care about ideological-driven lives. Once again, we have an organization, BLM, whose fundamental principles are aligned more with Marxism. As a matter of fact, their leaders have admitted to being “trained Marxists.”

There is nothing about the Black community and its real principles that are aligned with Marxism. Yet this organization, BLM, has somehow convinced people that they care about Black lives -- the question is, which ones? BLM also is seeking to advance itself by radical protest, not by addressing the real issues facing the Black community.

When has BLM gone to Chicago and taken on the issue of black on black crime, or to Baltimore, Detroit, pick your city? The BLM principles condemn the traditional nuclear family as a representation of white supremacy -- so, they embrace the decimation of the black family?

When I see these useful idiot, young, white progressives carrying signs that say, “Stop Killing Black People,” I just shake my head. Why are they not in Chicago? What about the little one-year old black child, who did survive not being aborted, killed in the womb, to be killed just a year later by gunfire from other Blacks?

I will congratulate the left on a brilliant marketing campaign of yelling “squirrel” and having the entire black community chase after their narrative of choosing. The NAACP and BLM are connected by their being created by white leftists who place black faces in charge for their manipulative purposes. They keep the Black community distracted and deceived.

The Black community needs to stop aligning itself with these progressive, socialist, statist, Marxist, and communist organizations that need victims. Karl Marx, Frederich Engels, and Saul Alinsky are not the kinda fellas the Black community should follow.

My ideological mentor is Booker T. Washington. He is without a doubt the Father of Black Conservatism. And he never embraced any ideologies that were antithetical to our fundamental principles and values as a constitutional Republic. And he never renounced his American citizenship.

It was Washington who once said, “There is another class of coloured people who make a business of keeping the troubles, the wrongs, and the hardships of the Negro race before the public. Having learned that they are able to make a living out of their troubles, they have grown into the settled habit of advertising their wrongs — partly because they want sympathy and partly because it pays. Some of these people do not want the Negro to lose his grievances, because they do not want to lose their jobs.”

And we all know that race hustling has become a very profitable business in America.