How Shall We Be Remembered? 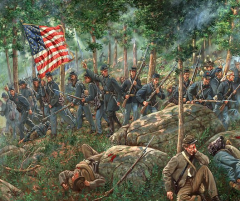 "Charge of the 20th Maine" Joshua L. Chamberlain leading the 20th Maine Regiment on Little Round Top. Painting by Mark Maritato, from fineartamerica.com.

Perhaps the title of this missive perplexes you, so let me clarify it for you. We study history not to memorize dates, but rather to learn of examples to follow, or not. I enjoy studying history because I believe in the quote attributed to George Santayana, that “those who fail to learn from history are doomed to repeat it.”

History -- its monuments and memorials -- are not there for us to decide which should stand or be destroyed, but rather to reflect, remember, and learn.

I enjoy reading and learning of the exploits of those who stood against insurmountable odds, but were led, guided, by their principles, beliefs, and convictions to stand. There are three favorite instances in history to which I often refer as examples that should be remembered forever.

The first dates back to 490 BC and the Battle of Thermopylae, where King Leonidas and his remaining Spartans stood, on the final day of battle, against the encirclement of the invading Persians under the despot, Xerxes. As Leonidas knew, a Greek traitor had led the Persians along a secret path to cut them off, but Leonidas would not retreat nor surrender.  He called upon one Spartan to deliver a message back to the City State of Sparta: “Go tell the Spartans, and strangers passing by, that here, obedient to their laws we lie.” That message is inscribed upon the monument to the Spartans at the Hot Gates this very day.

Secondly, I recall a young 26-year-old who found himself in charge of a small garrison of 185 at an old Spanish mission called The Alamo. Thousands of Mexican soldiers, under the command of the dictator General Santa Anna, gathered against Lt.- Col. William Barret Travis.

Travis chose one man, Juan Seguin, to deliver a message to Sam Houston. His letter called upon all Texans and Americans to come to his aid. But Travis pledged that he would not surrender nor retreat, and if no aid were to come, that he would die like an honorable soldier for the honor of his country. We know the story: 183 men were slaughtered, their bodies piled up and set afire. Today, the Cenotaph is their memorial, the empty tomb, for all to remember them.

Lastly, is my personal military hero, Colonel Joshua Lawrence Chamberlain, a professor of rhetoric from Bowdoin College in Maine. He joined the Union Army, believing in the cause of freedom, the sustaining of our Union. He was given the rank of a high-ranking officer because of his education. He had no military training.

Chamberlain found himself in command of the 20th Maine Regiment on a hot July day at a place called Little Round Top, cemetery ridge, in Gettysburg, Pennsylvania. His position was the end of the line of the 90,000-man strong Army of the Potomac. His orders were that he could not surrender or retreat, lest the entire Union Army be encircled by Lee’s Army of Northern Virginia.

The Confederates routed the Union soldiers in the “Devils’ Den” and set their sights upon Little Round Top. Casualties were mounting. Chamberlain had extended his lines to prevent a Confederate flanking movement -- then the ammunition ran out. Chamberlain had been shot in the leg, but he gave a one-word command, “Bayonets.” He drew his sword, and led a bayonet charge down Little Round Top, and achieved victory. An ordinary man who made a stand that resulted in an extraordinary achievement. He went on to be awarded the Congressional Medal of Honor and was two-term Governor of Maine.

How shall we be remembered as we face this COVID-19 issue?

I would have never believed that in our America we would deem our churches “non-essential” and have their doors shut on Easter. But one can go to a liquor store, buy marijuana, shop at Walmart, or murder a pre-born baby…that is essential?

Shall we be remembered for the unconstitutional decisions of elected officials to enact orders, decrees, mandates, and edicts that undermine our essential liberties? Will we be remembered as a nation, a people, who willingly surrendered our businesses, were forced into house arrest and illegal martial law, and saw healthy Americans be told they could not peaceably assemble?

Will history remember us as the America that once stood proud, free, and knew that our liberties were endowed to us by our Creator, not by man? Or shall we be remembered as the once-free people who allowed their freedom of speech, expression, and right to petition their government for redress of grievances to be usurped and censored by media platforms?

Americans have cherished the peaceful transition of power from one leader to another, the true essence of our Constitutional Republic. However, we now face the dark specter of knowing that one presidential administration unleashed the power of government agencies against a duly elected incoming presidential administration, their political opposition.

And where we once had a free press, we now appear to have an ideological press, one that propagandizes, and does not objectively present truth. If we turn a blind eye to tyranny and criminal behavior when it suits a certain political belief system, how shall we be remembered?

America has faced incredible challenges in its short 245 years of existence. Why do I say 245 years? It is because the ideal that is America began on April 19, 1775 at Lexington Green and Concord Bridge. It was on that day our forefathers made the courageous decision that individual liberty was worth a fight, even against the greatest power the world knew at that time.

Is America a perfect nation? No, far from it, but our history is replete with examples of courage that flow from that very day.

America is not a nation of moral relativism, personal subjugation, and feckless equivocation. America is a nation of men and women of courage and conviction, although that character is indeed challenged in these times. We must reject the economic enslavement of government largesse and prefer our own indomitable individual entrepreneurial spirit to guide us to economic restoration.

Romans 5:3-5 (NIV) states, “Not only so, but we also glory in our sufferings, because we know that suffering produces perseverance; perseverance, character; and character, hope. And hope does not put us to shame, because God’s love has been poured out into our hearts through the Holy Spirit, who has been given to us”.

The American psyche is such that trials and tribulations produce perseverance, perseverance strengthens our character [resolve], and our character is built upon hope -- not hope in man, but in our Creator God who endowed us with our unalienable rights.

I pray that we shall be remembered as the “Land of the Free” because we will always be the “Home of the Brave.”