The Great Society Has Failed 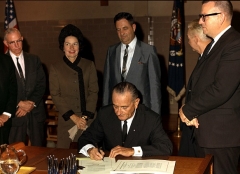 The old folks down south had a saying when I was growing up that went something like this: “That fella is just whistling past the graveyard.”

As with many of those wise sayings and metaphors, such as “an empty wagon makes the most noise,” you never learn the true meaning until later in life.

An empty wagon refers to someone who does not have anything in their head, therefore, they are the ones who make the most noise to cover their incompetence. Whistling past the graveyard referred to a person who fails to see the real issues they are facing.

And so here we are today in America, and both sayings have relevance, the former more so than the latter. Everyone is screaming, shouting, rioting, looting, and committing acts of violence in the name of combatting “systemic racism.” Truly, there are many folks, empty wagons, making a lot of noise, while so many others are whistling past the graveyard, not grasping the real issue in America.

The bottom line is simple:  The Great Society – the grand endeavor of the progressive, racist President Lyndon Baines Johnson, has failed. Fifty-five years later, we are witnessing the -- shall I say it --“chickens coming home to roost.”

The Great Society, also known as the infamous War on Poverty was launched as every other government top-down solution is, with great promise and “noble” intention. It was an updated version of Roosevelt’s “chicken in every pot” solution.

What Johnson and his ilk believed was that they could manipulate the outcomes in the lives of individuals and create equality. They embraced the notion that the government could “level the playing field,” and with a plethora of government subsistence programs, all would be well.

In reflection, we should all agree, and stop whistling past the graveyard, that this was a program intended to do one thing -- create economic enslavement, dependency.

The Great Society blunder has resulted in the modern-day 21st century economic plantation in which American inner-cities have absolutely cratered.

It does not take a PhD level study to grasp this. Consider my story, a young black kid born in a “Blacks Only” hospital in Atlanta, Georgia on February 7, 1961. I grew up in the historic Old Fourth Ward community, the same one that produced Dr. Martin Luther King Jr. and the cradle of the American civil rights movement, ya know, Sweet Auburn Avenue.

I learned to swim, box, and play basketball at the historic Butler Street YMCA. I went to Our Lady of Lourdes Catholic School, which was across the street from Ebenezer Baptist Church. And I walked to and from school by myself.

When I was born, the traditional two-parent household in the black community was nearly 77%. There were thriving Black-owned businesses all throughout our community, including Citizens Trust Bank, black owned. We kids played in the street, and on the weekend, we gathered in the Sears Roebuck parking lot to play baseball -- no sliding.

My older brother returned from Vietnam where he had been wounded as a Marine Infantryman at Khe Sahn. He wanted to be an Atlanta Police officer.

I could go on, but I think you are starting to get my point. Compare my inner-city experience to what is happening today.

Today, only 24% of black kids have mom and dad in the home. Matter of fact, Black Lives Matter has deemed the traditional nuclear family an extension of white supremacy. My school, well, it no longer exists, it is just a community center. Black-owned businesses are not as visible.

We can have all the conversations about racism you want, but we will just keep whistling past the graveyard. Until we recognize the devastation of Johnson’s irrational foray into massive government welfare has had upon our urban population centers, the problem will not be rectified. We can allow those empty wagons, like Al Sharpton, to be the loudest voices, or we can resolve ourselves to critically right the real wrongs that have been cast upon the American Black community.

The real issue is the “soft bigotry of low expectations.” That has resulted in the decimation and utter despondency we witness in American inner cities, controlled by Democrats over the past six decades. Their policies have created this incessant nightmare that is being unfolded before our eyes.

Yes, there are bad cops, as there are bad elements, individuals in any profession. However, the cancer that we are dealing with, not the symptom, is the breakdown of the family, destruction of educational opportunity, and thwarting of economic opportunity. But, no one wishes to address those issues, preferring to just continue to whistle past the graveyard.

The progressive socialist left does not want the issues created by The Great Society to be fixed. They do not want to see strong, two-parent families, educational freedom, and economic empowerment. No, on this new plantation, the left needs victims, and victims provide them with electoral patronage. The real discussion about racism should be about the policies that have turned American inner cities into combat zones, literally.

Sadly, with the advent of reality TV and other mindless programming, we are becoming a nation of lemmings and useful idiots, not critical thinkers. We prefer to succumb to the irrational emotionalism of which we are bombarded by the lords of propaganda. We used to have a responsible press.

The old folks down South were impeccably wise, and we should pay more attention to their lessons. Then again, we have devolved to a point where we do not respect our elders and heed their counsel.

The Great Society is a failure. We must acknowledge that fact, or just keep whistling past the graveyard.