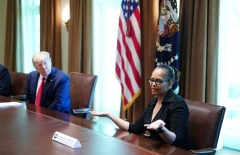 President Donald Trump and members of the Coronavirus Task Force listen to State Rep. Karen Whitsett (D-Mich.), who recovered from the novel coronavirus, at the White House on April 14, 2020. (Photo by MANDEL NGAN/AFP via Getty Images)

“They do not belong to themselves. They belong to the members and precinct delegates of the Democratic Party,” Mr. Kinloch said.

That was the response from the Michigan Democratic Party chairman on the censure of Michigan State Representative Karen Whitsett. Why is Rep. Whitsett being censured? Because she committed the ultimate sin, in the eyes of the Democrat Party: She is a Black woman who thought for herself. And therefore, she must be reminded, as Mr. Kinloch says, “they [meaning us colored folks] do not belong to themselves.”

Rep. Karen Whitsett is the woman who sat with President Donald Trump in the White House discussing her use of the hydroxycholoroquine protocol which she said enabled her to beat the COVID-19 virus and return to health. She thought for herself and praised President Trump, a heinous crime for which she must now be punished.

Imagine if this were a different situation, where a Black Republican elected official went to the White House and sat with President Obama, praising him for a policy decision. What would have been the reaction of the liberal progressive media? Chances are that person would be all over the magazine covers and the topic of much headline news.

And what if a white Republican State Party Chairman had said, “They do not belong to themselves”? Yes, that person too would be the center of much leftist media attention. That Republican state party chairman would be thrashed for using the pronoun “they.”

How did Democrat Speaker of the House Nancy Pelosi respond? She ripped up the speech that highlighted these Black Americans.

And what did the first black president, Barack Obama, do for the American Black community? He worsened race relations in America. Obama canceled the DC school voucher program. Obama put more Blacks, and Americans overall, into poverty and on government subsistence programs. Obama did not reform the criminal justice system. He just released criminals and referred to law enforcement officers as “acting stupidly.”

But somehow, President Trump is the racist?

Michigan State Representative Karen Whitsett is not the only evidence of the Democrat Party’s hypocrisy on race. The same thing is happening in my own birth state of Georgia, where Black Democrat State Representative Vernon Jones is being disparaged, denigrated, and demeaned for openly giving his endorsement to President Trump. Georgia Democrat Party Chairman Nikema Williams has stated that Rep. Jones does not represent the Democrat values.

Hmm, what values are those, when it comes to the Black community? The values of murdering over 20 million pre-birth Black babies? The values of destroying the traditional two-parent Black family?  The values of not supporting educational freedom, choice?

Recently, the Democrat Party has asserted that COVID-19 is having a disproportionate effect on the Black community. Well, last time I checked, the Democrats have overseen, an appropriate term, the major urban centers in America for almost 60 years.

The failure of their policies, emanating from the abhorrent Great Society endeavor of an avowed racist, Lyndon Baines Johnson, have created a 21st century economic plantation. All one has to do is journey into the major urban centers in America -- Chicago, Detroit, Baltimore, New York, Philadelphia, Atlanta, Houston, Dallas, New Orleans -- and the same thing plays out in each place – poverty, despair, broken families, gangs, lack of quality schools, and poor health practices.

Is it any wonder that the leftist media is not addressing these issues, other than to say it is racist? Funny, I have not heard too much from the leftist media on these stories about State Representatives Karen Whitsett and Vernon Jones.

The hypocrisy of the Democrat Party on race cannot be debated or denied. The party of slavery, segregation, and Jim Crow still lives. This is the party that created the Ku Klux Klan. It is well versed in voter suppression, intimidation, coercion, and threats, all of which were applied to recently freed Blacks.

Some things never change, as the Whitsett and Jones cases clearly indicate. This is the political party that did not support the 13th, 14th, and 15th Amendments to our Constitution.

And now, Blacks are supposed to be gleeful that Joe Biden may select a Black female VP running mate? That is just more identity politics and deception. It’s  a shame that Black Democrats are the new overseers on this economic plantation where the crop being harvested is not cotton, but votes.

A documentary called “Uncle Tom” is scheduled for release in June. You can go online and view some of the trailers now. The history and the hypocrisy of the Democrat Party on race in America shall be exposed. And afterwards, only those who wish to be economically enslaved to the party of collectivism and equality of outcomes can remain on the plantation.

For everyone else, a new Emancipation, based on economic empowerment, individual determination, and equality of opportunity, is coming.