The COVID-19 Boogeyman and Voting 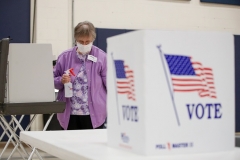 An election observer cleans voting booths during a Democratic presidential primary election at the Kenosha Bible Church gym in Kenosha, Wisconsin, on April 7, 2020. (Photo by KAMIL KRZACZYNSKI/AFP via Getty Images)

“Coronavirus gives us an opportunity to revamp our electoral system so that it permanently becomes more inclusive and becomes easier for the American people to access.”
– Former US Attorney General Eric Holder, Time Magazine, April 14, 2020

If there is one thing you can count on the progressive socialist left to do, it is telling you exactly their nefarious intent.

Just a mere two weeks before the aforementioned quote from Eric Holder, who is now the chairman of the National Democratic Redistricting Committee, Rep. James Clyburn, a South Carolina Democrat, stated on April 2, “this pandemic gives Democrats a tremendous opportunity to restructure things to fit our vision.”

And what was the title of the article in Time Magazine by Eric Holder? “Here’s How Coronavirus should change US Elections – For Good.”

I want y’all to take stop reading for a moment and digest what Clyburn and Holder have asserted. It goes to the core of Rahm Emanuel’s maxim, “never let a good crisis go to waste.”

I want America to recognize the abject deranged and devious intent of the progressive socialist left in America, the Democrat Party, to leverage a virus to their own electoral advantage. The Democrat (Socialist) Party wants the continued fear, panic, paranoia, and hysteria that their media accomplices have created. They do not want the American people to get back to work, to be released from the illegal martial law and house arrest that has subjugated our constitutional rights.

The new rally cry of the left is “mail-in ballots.”

It started when leftist Speaker of the House Nancy Pelosi, Democrat of California, attempted to sneak a national mail-in ballot initiative into the first COVID-19 stimulus package. Of course, we did not pass the bill to find out what was in it. Many read and studied it, and Pelosi was exposed. However, that did not deter the left from pursing their intent.

Just last week, in Pelosi’s California, her nephew, Governor Gavin Newsom, decreed that all ballots in California will be mail-in. Yes, just like that -- another unconstitutional edict, mandate, order from a leftist governor. And guess what: California is where Eric Holder has set up his base of operations. Coincidence? California also provides drivers licenses to illegals and allows them to vote in local elections.

It was also in California where a new leftist initiative – ballot harvesting -- was unleashed in the last national election, in 2018. That worked so very well for the left in California that Republicans who were heralded as the victor in their elections found themselves losing several days later.

You know, those ballots just kept flowing in from who knows where, and they were all for Democrats. This was prevalent in the Southern California area of Orange County, a Republican stronghold. You can rest assured that anything the left wants to implement nationally will first be tested in the progressive socialist laboratory called California.

And no, we here in Texas, the next largest electoral State in our Republic, are not immune from the left’s COVID-19 boogeyman.

Just this past week, the Dallas County Commission voted 4-1 to allow something so absurd, if it were not so serious, you would die laughing. They voted on and passed a resolution to establish that fear of COVID-19 is an accepted disability. And therefore, one can use that “disability” to apply for a mail-in ballot in Dallas County.

Yep, if you fear the COVID-19 boogeyman in the closet, and fear going out to vote, you can get a mail-in ballot. I told you it was absurd. The proliferation of COVID-19 fear, panic, paranoia, and hysteria is exactly what the left wants. And that is why this whole illegal martial law, shutdown, lockdown insanity must end.

Sadly, here in Texas, the path that Governor Greg Abbott took has provide cover to these progressive socialist leftists who control the major cities and counties here in the Lone Star State. The same resolution that the Dallas County commission approved, 4-1, the El Paso County commission is taking up. As well, in Harris County (Houston), led by far-left County Judge, Lina Hidalgo, they are allocating $11-$12M for mail-in ballots. County Judge Hidalgo is the person who wasted $60M on a temporary hospital set up at the NRG stadium in Houston, and which never saw one patient.

There is no debate about what the Democrat (Socialist) party wants in 2020. And there is no debate as to how they are seeking to attain that objective. They want electoral victories, and they especially want them nationally, most importantly, the White House. But they also want victories in targeted State elections, State House and Senate, for that is how they will gain control of the upcoming redistricting, which will come after the 2020 elections, and have an immediate impact.

Here in Texas, due to the mass exodus of population from economically failing leftist States – California, Illinois, New York, and New Jersey, we are gaining three new US Congressional districts. These new districts are sure to be in the areas of greatest population growth, the major population centers -- Dallas/Ft. Worth, Houston, and Austin.

And those of us who live in Texas know exactly which political party has power in those areas. Remember, it was in Dallas County where Salon owner, Shelley Luther, was sentenced to jail, because she reopened her Salon.

The left needs a boogeyman. COVID-19 fits the bill, and they are going to milk this to restructure things to fit their vision. The Democrats sadly, seem to not want our economy to reopen, for Americans to get back to work. And we now know, they want to use COVID-19 to change our electoral system – for good.

The best solution? Just make our national election day a national holiday, yes, the first Tuesday in November each even year. Unless you are truly disabled, which Texas state law defines, or out of the country, you can get to a voting site.

We can ill afford the COVID-19 boogeyman in the closet to instill a fear that results in the loss of our Constitutional Republic. But that is what the left seeks.