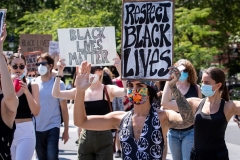 A protest, one of many across the country, in New York's Washington Square Park on June 19, 2020. (Photo by Ira L. Black/Corbis via Getty Images)

In the aftermath of the George Floyd incident, everyone seems to want to have a conversation about race in America.

Just recently, presumptive Democrat presidential nominee, former Vice President Joe Biden, asserted that if you couldn’t decide whether to vote for him or President Trump, “you ain’t black.”

So, let me clarify something: I was born in February 1961 in a “Blacks only” hospital, Hughes Spalding, in Atlanta, Georgia. I was raised by a proud Black man, Herman West Sr. and woman, Elizabeth Thomas West in the historic Old Fourth Ward neighborhood in Atlanta. My Mom and Dad are buried, together, in Marietta National Cemetery because of their service to our Nation.

There is a high possibility that I have forgotten more black history than some may ever learn -- or certainly know. I just authored a book titled, “We Can Overcome, An American Black Conservative Manifesto.”

I do not need to “qualify” my being Black based upon some pre-determined ideological agenda. I was raised to believe that I was an individual who could think and believe as I determined. I was taught that America is a place where regardless of where you were born, where you came from, there was an equality of opportunity.

That equality of opportunity has enabled me to attain immense success for myself and set the conditions for the success of my two daughters. My wife Angela, an accomplished former marketing professor and financial adviser, and I now teach our daughters about the perils of equality of outcomes, and those who cleverly disguise that intent within the cries of social justice.

With this being stated, I am tired of our Nation cowering, appeasing, acquiescing, and surrendering to this absurd organization calling itself Black Lives Matter (BLM). There is nothing true or sincere about this ideologically aligned progressive socialist, cultural Marxist organization.

BLM is just another leftist organization created by the same ilk of progressive socialists who created the NAACP. When one reviews the goals and objectives of BLM, they have nothing to do with the real issues facing the Black community in America. The focus of BLM is to cleverly advance the leftist ideological agenda under the guise of a witty name that forces people into guilt, shame.

I do not need any white person in America to kneel before me, apologize, wash my feet, or as the insidious comment of Chick-fil-A CEO, Dan Cathy, shine my shoes. I did a doggone good job of shining my own boots during my career in the US Army -- that was my individual responsibility, in which I took great pride.

I am tired of these businesses and corporations being shaken down by BLM to the tune of some $464M, $50M right here in my home of Texas. Why?

Black Lives Matter does not support the critical civil rights issue of this day. The major civil rights issue in America today is educational freedom. How many young black kids are relegated to failing public schools in failing neighborhoods? Where does BLM stand on that issue? They stand with the progressive socialist left and the teachers unions. Ask yourself, has BLM ever condemned the action of Barack Obama in April 2009 to cancel the DC school voucher program?

Yesterday was Father’s Day. How many young black kids are growing up without a father in the house, a strong positive role model, like my Dad, US Army Corporal Herman West Sr.? The policies of the progressive socialist left decimated the traditional two parent household in the black community. What does BLM say about the traditional, nuclear, two parent (man and woman) household? They say that is a tool of white supremacy.

If there is to be a conversation about the rule of law in America and the black community, let’s have that honest conversation. However, BLM wants us to believe that there is some focused, dedicated, intentional genocide being enacted against the Black community by law enforcement.

In 2019, there were a total of nine white law enforcement officer shootings of unarmed black men. Yet, how many blacks have taken to the streets to kill other blacks? And where is the outrage from BLM?

But, even worse, since 1973 there have been over 20 million unborn black babies murdered in the wombs of Black mothers. The organization mostly responsible for the industry of murdering unborn babies is Planned Parenthood. Planned Parenthood was founded by a known white supremacist, racist, a woman who spoke at Ku Klux Klan rallies -- Margaret Sanger. Planned Parenthood has over 70 percent of their “clinics” located in black communities across America.

I have never heard Black Lives Matter speak up, speak out, or speak against Planned Parenthood. Why? Simple, the white progressive socialist masters who fund, resource, and enable Black Lives Matter don’t give a darn about the lives of Black children.

I could go on, but I think you get my point. Black Lives Matter is an oxymoronic and disingenuous organization. As a proud American Black Man, I find Black Lives Matter an offensive and condescending organization whose hypocrisy is blatantly evident. Yet, thanks to the lucrative support of the white progressive socialist collective elitists, it survives, and extorts financial support from the useful idiots in our corporate structure.

All lives matter, but this radical organization, Black Lives Matter, is the ultimate Trojan Horse. The consistent purveyors of systemic racism in America is the Democrat Party. They have smartly devised this organization to enable their ends, the proliferation of the 21st century economic plantation. Black Lives Matter serves as overseers on this plantation, stoking the irrational emotionalism and angst to support their agenda, their purpose.

What is the purpose? Simple. The new plantation of the left is not about producing cotton. It is about creating victims who will be dependent, and produce the new crop -- votes.