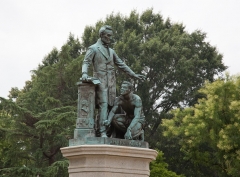 Bronze statue entitled 'Emancipation' depicts US President Abraham Lincoln and a newly liberated slave rising at his feet. The statue in Washington, D.C., was built almost entirely with funds donated by former slaves and dedicated in 1876. (Photo by Carol M. Highsmith/Buyenlarge/Getty Images)

“Useful idiots” is a phrase attributed to Vladimir Lenin, who supposedly used it to describe communist sympathizers in Western Civilization.

It is a very appropriate descriptor when it comes to the so-called “woke” mob of the so-called “resistance” that has overtaken the streets of America. Well, let me rephrase that: They have overtaken the streets of major population centers in America. The infestation of wokeness and idiocy seems concentrated in the very places where progressive socialist policies have failed in America.

Consider the idiocy of a city in Colorado that is incarcerating people who do not wear a mask. Yet these same leftists claimed that criminals had to be released from incarceration due to the threat of COVID-19. Or consider the idiocy of going into the home of private citizens and confiscating their weapon, their right to keep and bear arms, for no apparent reason, other than they defended their property, safety, and security against the invasion of the “woke” mob -- the useful idiots.

In Seattle, the useful idiots established their own autonomous zone, driving out law enforcement. The mayor of Seattle described the autonomous zone called CHOP as having a festive atmosphere. Well, that ended once the threats, looting, and murders of two young black men happened, and the mayor ordered police in to reestablish law and order. Now, the useful idiots of Seattle want to recall the mayor.

What is amazing to me is that we have these young black boys and girls who have joined the useful idiocy. Consider what happened at the University of Wisconsin where the black student union demanded the removal of the statue of President Abraham Lincoln. It appears they believe, wrongly of course, that Lincoln did not do enough for blacks -- what?

Hmm, President Lincoln, the first Republican president, lost his life because of his commitment to freedom for Blacks. What more do the useful idiots think Lincoln should have done? Even in his own words, President Lincoln talked about giving the last full measure of devotion, his words from the Gettysburg Address.

And the absurdity does not end there. Consider, over Memorial Day weekend, useful idiots tore down the statue of Frederick Douglass. Douglass’ story is beyond amazing, and he should be the example that the young black members of the useful idiot club follow.

Douglass was a freed, self-educated slave who became a leading voice for freedom and abolition of slavery. And do not forget the defacing of the memorial to the 54th Massachusetts Regiment of the Civil War in Boston. They were the first all-Black unit to serve America. They are my predecessors.

So, why do you tear down statues of Abraham Lincoln, Frederick Douglass, or memorials to Black soldiers? Only one answer, you’re a useful idiot.

America’s useful idiots want to embrace a philosophy of governance that is the antithesis of the liberty and freedoms that they enjoy. Do not believe me? Well, how about our woke little temper tantrum kids take a trip to Hong Kong. There you will find young people resisting the very ideology that our young people want to live under. How about our useful idiots talk to those Venezuelans who now reside in the United States, like former Miss Venezuela Carmen Maria Montiel, and learn just how awesome socialism truly is.

America’s useful idiots are busy searching and destroying anything that they claim is connected to systemic racism. Then why are these little cherubs aligning themselves with the Democrat Party? If we were to do a truly historical analysis of the Democrat Party, you would find the real purveyors of systemic racism in our country. I could go on, but think about the history of a political party that voted against the 13th, 14th, and 15th Amendments. A political party that created our first domestic terrorist organization, the Ku Klux Klan -- oh, yeah, they created the second one also, Antifa.

The KKK was established to prevent freed Blacks, thanks to Republican efforts, from voting – Republican! Heck, the first Congressional Black Caucus was not Democrat. Jim Crow, segregation, lynching, all the darkest moments in U.S. history are tied to the very political party of which these useful idiots belong.

And just a reminder, the Civil Rights Act of 1964 passed because of a Republican Senator, Everett Dirksen. The longest filibuster in U.S. Senate history was done by Senate Democrats seeking to block the civil rights bill from even getting to the Senate floor. And West Virginia Senator, Robert Byrd, was one of them. He was a Grand Wizard in the KKK. He never switched political parties. He was praised by people such as Bill and Hillary Clinton, Barack Obama, and Joe Biden. Yet Byrd’s statues and memorials have not been targeted for destruction -- why?

How did we get to this point? Simple, we stopped teaching history and civics. Those subjects were replaced with social studies, which is just the study of leftist ideological agendas. Our education system is no longer based upon learning, educating, it is focused on indoctrinating. Leftists have overtaken our school boards, the most important elected positions in America. Yet, it is the elected position that routinely has the least amount of voter participation.

Lenin was correct. Western Civilization would topple because of useful idiots advancing the ideals of socialism, communism, and Marxism. And it began in the halls of our academic institutions. The irrational emotionalism that is spreading like cancer across America is quite disconcerting, utterly illogical.

The problem is that there are those who believe you can appease the mob. That you can have a rational discussion with a useful idiot. What we can do is take a stand, speak up, and just say no!

If we fail to say no to America’s useful idiots, then another of Lenin’s quotes will come to fruition -- “the goal of socialism is communism.”