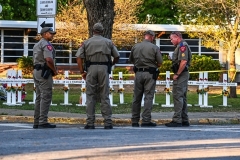 Police officers stand near a makeshift memorial for the shooting victims at Robb Elementary School in Uvalde, Texas, on May 26, 2022. (Photo by CHANDAN KHANNA/AFP via Getty Images)

Two days after an 18-year-old gunman locked himself into a fourth-grade classroom and fatally shot 19 children and two teachers in Uvalde, Texas, news outlets have obtained video of parents standing outside the one-level building, begging law enforcement officers to go inside and stop the carnage:

But it took a long time -- how long, still to be determined -- for law enforcement to confront the killer.

Texas Department of Public Safety Director Steve McCraw on Wednesday "refused to give an exact timeline," The New York Post said, "only saying that the gunman was inside the school between 40 minutes and an hour."

"What are you doing — get inside the building!" one parent yells in the video posted by the newspaper.

"[The gunman broke into the school despite being confronted outside by an officer who did not open fire, officials detailed Wednesday. He was inside for up to an hour as SWAT officers reportedly waited for a staff member to bring a key for the classroom he was barricaded in.

"One of the disturbing clips, seen nearly 2 million times by Thursday, shows several parents trying to get past police lines. One woman appeared to be pinned on the ground by an officer, with an onlooker screaming, “What the f–k are you doing to her? Let her go!”

"Another clip caught even more angry parents confronting officers standing around outside, with the livestreamer saying that it had 'already been about an hour and they still can’t get the kids all out.'"

"What we do know is that that gunman was encountered by several local police officers here in Uvalde in which there was a exchange of gunfire. Those two police officers were shot, trying to make entry into the school.

"The gunman was then able to barricade himself in that classroom, which was adjoined by another classroom in which the shooting took place. And he just conducted this horrific act of violence to these children, to these teachers that were inside that classroom."

Ingraham asked Olivarez how long it took law enforcement to enter the building: "I was wondering, how is it more than 36 hours about later almost, we still don't have that timeline?" she asked.

"So one thing that we want to do, because of course, there's a lot of reports that are out there right now, especially on social media. But we haven't been able to corroborate the timeline. We want to make sure we provide accurate information by gathering the facts.

"So we are speaking to witnesses. We're actually speaking to the initial officer, the school resource officer who arrived on scene. We're trying to establish that this officer was actually encountered by the shooter. If he was in his vehicle, if he was off his vehicle. So right now he's also going to be a key witness in this investigation as well because he was the first on scene.

"We did have multiple officers arrive on scene at a moment's notice when this gunman made entry into the school. But also, as I mentioned, two officers were shot. At that point, they were trying to evacuate other children and teachers in that school by breaking windows around the school and trying to evacuate as many people as possible.

"And that's when, of course, the tactical team arrived with Border Patrol, deputy from Zavala County, also other local law police officers that made forcible entry into that classroom. And also -- that were met with gunfire, but they were able to shoot and kill the gunman."

Ingraham asked about reports that the gunman entered the school through an unlocked back door: "Do we know that?" she asked.

Olivarez responded that police "received a call of a crashed vehicle nearby the school and also a gunman carrying a long rifle making his way towards the school.

"So we're actually speaking with that witness, that officer, as we speak right now," he said. "But we do know, Laura, is that once this gunman made entry into that school, those officers were met with gunfire. So again, trying to establish that timeline from the time he crashed his vehicle to the point where he made entry into the school, and also how long was he in that classroom. We want to make sure we gather all the facts and provide accurate information."

Olivarez could not say if any children trapped in the classroom survived:

"But what I can tell you, I can't even imagine what those children were going through at that particular moment, especially the teachers. How terrified they probably were, if they were screaming, if they were yelling for help.

"What we do know some of the officers that were on scene, they heard the gunfire. They heard the screaming from these children. So it's just hard to imagine. And also what these--"

"So we don't know" about survivors? Ingraham interrupted:

"Exactly, we do not know," he said. "But what I can tell you right now is that these officers that responded, just what they went through, how (the) impact was going to be for them, and also the entire community here in Uvalde."