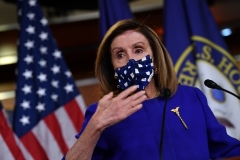 Speaker of the House Nancy Pelosi (D-Calif.) at one of her October 2020 news conferences. (Photo by NICHOLAS KAMM/AFP via Getty Images)

House Speaker Nancy Pelosi (D-Calif.) indicated on Thursday that she wants to avoid saying Donald Trump's name now that he's out of office.

At her weekly news conference, Pelosi was answering a question about the Biden administration's immigration bill.

"I salute the president for putting forth the legislation that he did," Pelosi said, noting that some lawmakers prefer a more "piecemeal" approach than Biden's “comprehensive” bill.

“There are others who want to do piecemeal, and that may be a good approach too. That's up to the Congress to decide.

“But I was thinking this morning, in anticipation of their announcement of the Citizenship Act, that a few years ago, couple years ago -- guess it must be longer than that now -- when Trump was a new president -- oh, did I say his name?" Pelosi interrupted herself, raising her hand to her mouth.

(She went on to make the point that "comprehensive" immigration reform will grow the U.S. economy.)

When Donald Trump was president, Pelosi -- one of Trump's fiercest critics -- nevertheless frequently mentioned that she regularly prayed for his well-being.