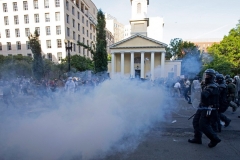 Police officers push back demonstrators, shooting tear gas next to St. John's Episcopal Church across from the White House on June 1, 2020. (Photo by JOSE LUIS MAGANA/AFP via Getty Images)

Fox News's Laura Ingraham lives in Washington, D.C., and on Sunday night, she said she witnessed some of the rioting, including the arson at the historic St. John's church.

"I felt like I was back in Iraq in 2006, in February, except I actually felt a lot safer on the streets of Baghdad than I did at times in D.C. last night," Ingraham told her audience Monday night.

Now, the aim of these criminal enterprises, including Antifa, but not limited to Antifa, is to undermine confidence in our institutions of government at all levels -- local, state, and federal.

These wanton acts of violence are part of a coordinated effort to eventually overthrow the United States government. It's well-funded, and it's well organized on social media. No Twitter warnings, by the way, from Jack Dorsey even though they seek nothing short of an overthrow of all that we love and believe in. And elimination of our Constitution, basically all of our rights, including the Second Amendment, and much of the First.

They don't care about George Floyd. They're using and abusing his memory to create more suffering and more chaos. It's like one giant video game to some these folks, but their call to duty is one of annihilation of the country that we all love.

Now, where did this all come from? I was thinking about this today talking to friends and down the road in D.C., where did it come from? Why is there so much hate? The American people and law enforcement officers are overwhelmingly good people. It goes way beyond anger over the tragedies of Floyd and Trayvon Martin and Philando Castile.

The genesis of this seething hatred began decades ago at our universities, and it spread like a contagion into all levels of learning. Radical professors attacking the ideals of Western Civilization, and it's only gotten worse.

Yesterday -- check this out, one professor at the University of Alabama provided a tutorial on Twitter about how to pull down national monuments. And guess what? The tweet by the professor, Sarah Parcak, is still up on Twitter. And Jack Dorsey claims Trump's tweets are encouraging violence?

This woman is a professor, and she's getting paid with the tax dollars that the University of Alabama gets. And by the way, universities are teaming with America-hating indoctrinators like her. Not only will she not get fired for that, she'll probably get an award at the next faculty meeting.

The finest colleges in the nation are producing America-hating agents provocateur. Like this aggrieved Princeton and NYU law school grad Colinford Mattis -- he was allegedly behind the wheel of a tan minivan as his passenger, fellow attorney and Florida law school grad Urooj Rahman, when she threw a Molotov cocktail into a police cruiser.

Hateful, anti-American poison is also spewed in some of our churches as well. Who can forget Obama's pal, Reverend Jeremiah Wright, "U.S. Of KKK" rant? But ultimately this all comes from us, the people. How are we parenting our kids? Are we teaching them to love and respect everyone, no matter what race, no matter what ethnicity? Are fathers on the scene at all?

Are we teaching them basic right from wrong? Don't take anything that's not yours, even a penny? When we don't teach the light of God's love, we risk that our children and our country get sucked into the darkness eventually. And that's what you're seeing play out tonight.

Ingraham said the nation needs "strong leaders" to pull us away from the "lawlessness," but in many riotous blue states, Democrat leaders are unwilling to stop the violence because they're trying to be politically correct and not ally themselves with President Trump.

"Liberal media outlets are portraying the lawless rioters as "freedom riders," even as they continue "smashing, grabbing, pushing, beating, destroying, and yes, ultimately killing, they hope, the spirit of this country...

"These news anchors, if that's what you want to call them, they're taking sides with anarchists," Ingraham said. "They are willing to help the country burn, out of their obsession with removing Trump from office."

"Well, that's not going to happen," she concluded: