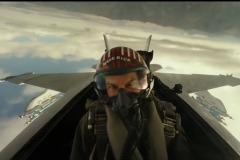 “Top Gun: Maverick” is flying high at the box office, taking in a Memorial Day weekend record $156 million at the U.S. box office. The film’s pro-America themes demonstrate that the need for speed is not the only force drawing audiences to theaters.

Conservative commentator Ben Shapiro called the “Top Gun” sequel “quite delightful” and applauded its unusual portrayal of people in the military as “strong.”

“Hollywood has spent decades treating the military as either victims of mental health problems or people who are victimized by the evil American regime or as imperialists themselves,” says Shapiro in a review of the film posted on his YouTube channel. “That’s not what you get from this,” Shapiro explains:

“Top Gun: Maverick” also made an alteration that ended up complying with fans’ demands, rather than those of Chinese officials.

In the original “Top Gun” film (1986), Lieutenant Pete 'Maverick' Mitchell (played by Tom Cruise) wears a leather bomber jacket featuring patches on the back, commemorating his father's battleship tours to Japan and Taiwan.

China does not recognize Taiwan as a sovereign nation and, when the new film’s trailer was first released, both the Taiwan and Japan patches had been “replaced by random symbols in an apparent kowtow to the Communist nation's political demands,” The Daily Mail reports.

But, when “Top Gun: Maverick” debuted in theaters over the weekend, fans noticed that the two flags had been restored to Maverick’s bomber jacket.

Ho Siu Bun, a film critic in Hong Kong, told VICE World News that the reinstatement of the flags is “unprecedented.” “Major film studios have never been shy about pandering to the Chinese market. And, even if it is a simple scene, editing is very costly. So no one knows why they changed it back.”

Tencent Pictures, a Chinese film distributor and production company that helped with producing the aviation romp, allegedly sought the removal of the flags in the trailer, Daily Mail reports.

Despite being set to receive a 12.5% stake in the “Top Gun” sequel, the company ended up pulling out, fearing that the film’s celebration of the U.S. military would threaten its loyalty to the Communist Party, according to a New York Post article.

Despite the bans in China and Russia, the “Top Gun” sequel is enjoying worldwide success at the box office, raking in $280 million through Memorial Day, according to The Hollywood Reporter.