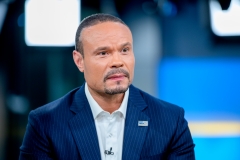 "I'm vaccinated, but I stand with anyone with a moral or medical objection to the vaccine," Media Research Center and CNSNews Founder Brent Bozell tweeted in support of radio host Dan Bongino, who told his employer Cumulus Radio "you can have me or you can have the [vaccine] mandate."

I'm vaccinated, but I stand with anyone with a moral or medical objection to the vaccine. This is about freedom. We should be free to take the vaccine or not. #StandWithDan https://t.co/fOAzcC2zTr

"This is about freedom," Bozell continued. "We should be free to take the vaccine or not. #StandWithDan."

Cumulus ordered its employees -- including Bongino, who is vaccinated -- to get vaccinated in August and has started firing individuals over it. Bongino replied:

“Have these companies ever thought of...the countless numbers of moms and dads who are sitting at some kitchen table explaining to their kids how they may have to move out? How daddy doesn't have a job because a bunch of people in the C-suite thought it'd be a good idea to sit around and play pretend Dr. Fauci for a moment, and mandate people jam something in their bodies that they don’t want to take?”

"I will no longer be hosting a talk show on KVOR; nor announcing on KKFM as I have been terminated due to my refusal because of doctor's orders to receive the Chinese COVID-19 injections," former Cumulus weekend host Tron Simpson said on Oct. 8.

"I’m going to make my medical decisions after consultation with my doctor – and it won’t be forced onto me by the CEO of a company that I’ve never met or knows nothing about me,” said fellow weekend host Jeff Crank, who quit Cumulus rather than get vaccinated, according to the Colorado Times Recorder.