U.S. Will Now Import More Oil than It Exports Under Biden 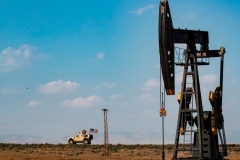 A US military vehicle, part of a convoy arriving from northern Iraq, drives past an oil pump jack in the countryside of Syria's northeastern city of Qamishli on October 26, 2019. (Photo by DELIL SOULEIMAN/AFP via Getty Images)

The U.S. Energy Information Administration (EIA) predicts that under the Biden Administration, the U.S. will now once again import more oil than it exports in 2021.

In the forecast the EIA states:

In their Short-Term Energy Outlook for 2020, the EIA “estimates that 2020 marked the first year that the United States exported more petroleum than it imported on an annual basis. However, largely because of declines in domestic crude oil production and corresponding increases in crude oil imports”.

After taking office, President Biden issued a 60-day moratorium on the issuance of new oil and gas operations permits.

“To issue any onshore or offshore fossil fuel authorization, including but not limited to a lease, amendment to a lease, affirmative extension of a lease, contract, or other agreement, or permit to drill. This does not limit existing operations under valid leases. It also does not apply to authorizations necessary to: (1) avoid conditions that might pose a threat to human health, welfare, or safety; or (2) to avoid adverse impacts to public land or mineral resources.”

Members of the House Energy Action Team (HEAT) wrote to the administration in opposition to the order, Co-chair of HEAT Rep. Markwayne Mullin (R-Okla.) stated,

“It was no secret Joe Biden planned to destroy the oil and gas industry if elected president and in the first two days of his administration, he’s taken actions to do just that. This move only makes us more dependent on foreign oil and increases prices for American families, not to mention eliminates good-paying jobs in the middle of a pandemic. I strongly oppose this decision and I urge the Biden Administration to reconsider.”