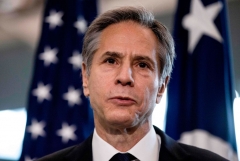 Newly confirmed US Secretary of State Antony Blinken speaks during a welcome ceremony at the State Department in Washington,DC on January 27, 2021. (Photo by CARLOS BARRIA/POOL/AFP via Getty Images)

President Biden’s pick for Secretary of State, Antony Blinken confirmed at his confirmation hearing on Jan. 19 that he would create a special envoy for LGBTQ+ and allow U.S. embassies to fly the gay pride flag.

Sen. Edward Markey (D-Mass.) asked, “Are you going to move forward towards a speedy appointment towards an LGBTQI envoy, and would you consider raising it to a ambassadorial level?”

Blinken: The answer to both questions is yes, absolutely. This is a matter I think of some real urgency. We’ve seen violence directed against LGBTI people around the world increase. We’ve seen, I believe, the highest number of murders of transgender people, particularly women of color, that we’ve seen ever, and so I think the United States playing the role that it should be playing in standing up for and defending the rights of LGBTQI people is something that the department is going to take on and take on immediately.

Markey: Thank you. And will you repudiate the findings of the report of the Commission on Unalienable Rights and reaffirm the United States' acceptance and adherence to the human rights laid out in the Universal Declaration of Human Rights, and will you ensure that ambassadors are able to fly the pride parade--flag at our embassies once again around the world?

Blinken: Yes, to both.

"As the president said on the night we were elected, we're proud to be able to serve every American," Pence said when pressed about what he would say to the LGBTQ community that feels the decision runs counter to President Donald Trump celebrating pride month in a tweet.

"We both feel that way very passionately, but when it comes to the American flagpole, and American embassies, and capitals around the world, one American flag flies."