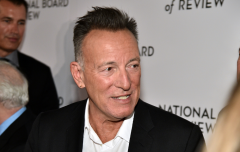 Rock-and-roll star Bruce Springsteen called for a “ReUnited States” in a sentimental Jeep commercial broadcast during the Super Bowl. "The Boss,” who wishes for Americans to meet in “the middle” socially and politically, has a long history of radical views, including support for abortion, socialized medicine, and allowing transgender biological males into girls' restrooms.

In the Jeep ad, Springsteen narrates, “There’s a chapel in Kansas, standing on the exact center of the lower 48. It never closes. All are more than welcome. To come meet here in the middle.

“It's no secret, the middle has been a hard place to get to lately. Between red and blue. Between servant and citizen. Between our freedom, and our fear.”

A New Jersey native with a second residence in California, The Boss, in the commercial, drives a Jeep CJ-5 through rural America complete with weathered western boots, earrings, and a cowboy hat.

The ad continues, showing Springsteen rolling his hands through soil while stating, “We just have to remember the very soil we stand on is common ground.”

After images of churning rivers, crosses, and rural highways grace the screen, Springsteen says his final remarks while entering the quaint U.S. Center Chapel and lighting a candle.

“We can make it to the mountaintop, through the desert, and we will cross the divide,” he says.  “Our light has always found its way through the darkness, and there's hope on the road up ahead.”

Despite his call for Americans to meet in the middle, Springsteen himself has repeatedly endorsed and supported left-wing causes such as allowing transgender “women” (biological males) into girls’ bathrooms and supporting abortion across the board.

At an Obama rally on Oct. 24, 2012, Springsteen claimed he was very grateful for “universal healthcare” (socialized medicine), a “more regulated Wall Street,” and added, “I’m concerned about women’s rights and women’s health issues around the world.”

“I don’t have to tell you the danger to Roe v. Wade,” said Springsteen. “I’m also concerned about the growing disparity of wealth between our best-off citizens and our everyday citizens.”

Springsteen has an estimated net worth of $340 million.

Regarding transgenders and bathrooms, Springsteen canceled a 2016 show in Greensboro, North Carolina because the state passed the Public Facilities Privacy and Security Act, which designated bathroom use based a person’s biological sex, and prohibited transgender “women” (biological males) from using real women’s restrooms.

In an April 8, 2016 statement, Springsteen said, As you, my fans, know I’m scheduled to play in Greensboro, North Carolina this Sunday. As we also know, North Carolina has just passed HB2, which the media are referring to as the “bathroom” law. HB2 — known officially as the Public Facilities Privacy and Security Act — dictates which bathrooms transgender people are permitted to use. Just as important, the law also attacks the rights of LGBT citizens to sue when their human rights are violated in the workplace.

“No other group of North Carolinians faces such a burden. To my mind, it’s an attempt by people who cannot stand the progress our country has made in recognizing the human rights of all of our citizens to overturn that progress. Right now, there are many groups, businesses, and individuals in North Carolina working to oppose and overcome these negative developments.

“Taking all of this into account, I feel that this is a time for me and the band to show solidarity for those freedom fighters. As a result, and with deepest apologies to our dedicated fans in Greensboro, we have canceled our show scheduled for Sunday, April 10th. Some things are more important than a rock show and this fight against prejudice and bigotry — which is happening as I write — is one of them. It is the strongest means I have for raising my voice in opposition to those who continue to push us backwards instead of forwards."

In Michigan, The Boss warned fans he would boycott their state, as well, if a similar “bathroom bill” was passed.