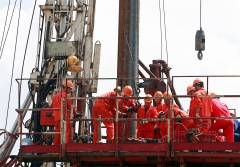 After Democratic President Joe Biden signed an executive order on Wednesday that rescinds a permit for constructing the Keystone XL pipeline, to run from Canada to the Gulf of Mexico, Canadian company TC Energy Corp fired 1,000 workers, Americans and Canadians.

"A majority of the 1,000 are unioned workers who have been constructing on both sides of the border," TC Energy spokesman Terry Cunha told Bloomberg News.

The pipeline, which was already under construction, would have spanned over 1,000 miles and carried up to 35 million gallons of crude oil every day from Canada to U.S. refineries at the Gulf.

In 2015, the Obama-Biden administration refused to okay a permit for the pipeline. But in 2017, President Trump granted the permit for construction to begin.

In October 2020, Keystone XL announced that it had awarded $1.6 billion in contracts to U.S.-union contractors for pipeline construction in three states. “The six contractors will be directly responsible for hiring more than 7,000 union workers in 2021, with special emphasis placed on hiring locally first and giving priority to qualified local and Indigenous-owned businesses,” said the company.

By rescinding the permit, President Biden killed those 7,000 union jobs in the U.S. (and $1.6 billion in gross wages), reported Audrey Conklin with FOX Business News.

In 2017, President Donald Trump signed an executive order allowing for the construction of the Keystone XL pipeline. (Getty Images)