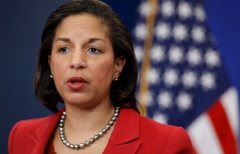 During an interview on MSNBC about Campaign 2020, Ambassador Susan Rice, the former national security adviser to President Barack Obama, stressed that Joe Biden needs to win the election because he is the leader who can "consign" Trump and his Senate supporters to the "trash heap of history."

"What's important about what Senator Klobuchar said and did is that she made clear this election -- and whoever Joe Biden chooses, among many very talented candidates -- is about getting Joe Biden in the White House," said Rice on MSNBC.

"Somebody who can heal and unify the nation," she added, "and remove Donald Trump and consign him and those who supported him in the Senate to the trash heap of history."

Vladimir Lenin, center left, and Leon Trotsky, waving, during the early days of the Bolshevik coup d'etat in Russia. (YouTube)

As the late William Safire explained in the New York Times in 1983, "The phrase was popularized by Leon Trotsky, who told the Mensheviks departing from the 1917 Congress of Soviets, ''Go to the place where you belong from now on -- the dustbin of history!' That was the way his phrase, transliterated as musornyi yashchik , was translated in the English edition of Trotsky's autobiography; in reviews of the movie 'Reds,' Trotsky was quoted as saying of the faction opposing the Bolsheviks, 'They are just so much refuse which will be swept into the garbage heap of history.'"

Rice was notorious for repeatedly telling the American people that the Benghazi, Libya attack in 2012, which killed four Americans, was sparked by an anti-Muslim video.