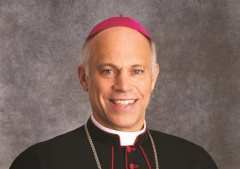 While discussing his prayer and fasting campaign for the conversion of House Speaker Nancy Pelosi (D-Calif.), a pro-abortion Catholic, to the immutable pro-life teaching of the Catholic Church, San Francisco Archbishop Salvatore Cordileone explained that abortion is a satanic ritual, a "satanic practice."

On EWTN's Oct. 7 edition of Pro-Life Weekly, host Catherine Hadro asked the archbishop, "In the past, you have spoken very clearly that abortion is a satanic ritual. Can you speak more to that because our culture equates abortion with health care?"

"The Texas heartbeat law is being challenged by the Satanic Temple, precisely on the grounds that it is a violation of their religious liberty," said Cordileone. "They need to have access to abortion to carry out their rituals. It's a satanic practice."

"When we figure that one-out-of-four pregnancies ends in an abortion, we are literally in the grip of the Devil," said the archbishop. "That's why we need prayer and fasting so much, so greatly. I hope everyone will engage in this prayer and fasting campaign."

In conclusion, Hadro said, "Our viewers can find more information at benedictinstitute.org."